The airline carrier line of business has been a very popular topic in the last few years.  Many changes have taken place such as bigger and better planes, new competitors, mergers, and some not so good news.  The U.S. carriers have been dropping in their ranking internationally over the last several years.  Asian and Middle Eastern competitors have been dominating the international market.  However, it was recently noted that the U.S. seems to be switching its gears and is taking a position to head into the international game stronger than it ever has.  The bigger U.S. carriers have closed their mergers and have adjusted their managerial approach and are on the rise again.

While all of these mergers were going on with the U.S. carriers, Asia and the Middle-East took advantage of the time to take over the international air traffic.  Both Asian and Middle-Eastern airlines dominated the international markets while all of this was going on in the U.S.  Also because of all of the mergers that the U.S. carriers have been going through, it has been noted that they have fallen a bit behind on the aircrafts they are using although this may be changing quickly with Boeings new product.

The chart below shows the ranking of airlines done by the World Airline Awards.  The first U.S. airline in the ranking was Virgin America ranked 26th.

The issue now is for the U.S. to enter the international market and make its presence known.  Latin America and Africa both had an increase in demand for air traffic but the U.S. missed the opportunity to enter the market during that team.  It seems that with all of the upgrades to the U.S. carriers, they should be able to hit the international market much more effectively the next time an opportunity like that arises.  It would be interesting to see how the U.S. carriers choose to enter the international market considering the different routes they can take to do it.  One of their many options is to rush into the situation to try and make an impact as soon as possible.  The concern with this is that they may try to cut corners to enter the market quicker.  This type of strategy usually comes at the cost of the customer.  Another option they have is to upgrade their fleets and then enter the market.  The downfall with this is time.  While they are upgrading their fleets, other international carriers may be upgrading their own fleets and pulling farther ahead which would make it more difficult for the U.S. to enter later.  They would also have to take into consideration the opportunity cost of taking an even longer time than they already have been.

If you were a U.S. carrier, what strategy would you use to enter the international market?  This does not have to be one of the methods listed above and can be your own idea.

Would you even consider waiting any longer to enter the market considering the state of carriers currently? 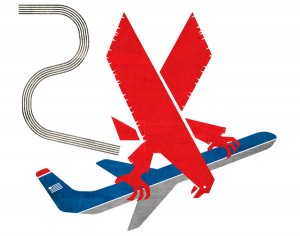