As the demand for any product grows, a corporate powerhouse with efficient standardized processes seems to rise with it. Yoga, which began as an art for the spiritual or inward looking, has been no exception. Look at these numbers that show the growth of yoga in recent years (reported by Emily Ritter of ChannelSignal.com early this year). 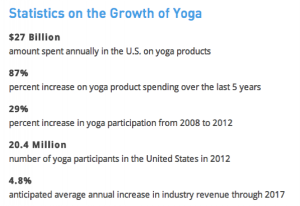 CorePower Yoga has capitalized on this growing trend. They have “corporatized” what was initially more of an art so people can accomplish a full workout in one yoga session. All classes include an abdominal workout section, many are heated so you can break a sweat, there are class options with weights, etc. The idea is you can do a 1-hour yoga workout that will cover cardio, strengthening, flexibility and finding your inner chi.

I have dabbled with yoga throughout the last few years to gain an advantage as a basketball player. The typical workouts basketball teams do are lifting, running and basketball practice, all mostly restricting flexibility. Yoga is unique in it focuses on increasing this very valuable flexibility. CorePower also adds weights and an abdominal section to many classes – even more benefits for an athlete like myself. Great, right? I wasn’t a fan.

The best yoga class session I ever had was one-on-one session in the heart of my workday with a really weird dude, Chad. I walked into what was supposed to be a group class session at Cat Financial to see I was the only employee who showed up. We began with a few simple poses so Chad could assess my flexibility and strength. What followed was a plethora of poses tailored specifically for me. Chad encouraged me to try new things or stay where I was based on how I feel. He talked me through the origins and purposes of different parts of the practice. There was no music and no heat like CorePower. Chad didn’t care if I stayed on my mat or followed exactly what he was saying. By the end of the session, I was flowing through my own combination of poses focusing inward. When I went back to work I felt refreshed, not just physically, but mentally too. Yoga with Chad was personalized, creative, an art, and the best yoga experience I’ve had.

CorePower Yoga created efficient standard operations to allow the optimal large-scale production, and this is usually viewed as a positive, but maybe it’s not always better. I learned through yoga that variability and personalization, even if inefficient on a large scale, could be preferred. Chad only had one student in his class because most people seeking out yoga will be led to a CorePower, not a freelance instructor. Maybe they would be better off if there was not a corporate in the way of them finding an artist.

My questions: Is large-scale operational efficiency brought by corporate powerhouses always a benefit to society? If not, where are other markets you see it as a disadvantage?

The Sky’s the Limit exercise was very interesting for me after spending the summer interning with large corporate finance company’s internal consulting team.

In the Sky’s the Limit exercise, teams of 4-5 had 20 minutes to build a structure out of spaghetti and marshmallows. There was a budget of around $20,000 with mini marshmallows costing $1,000 and large marshmallows $5,000. Spaghetti sticks were free. The goal of the project was to build the tallest structure possible that could stand for 20 minutes and then hold 50 sheets of paper for 1 minute.

I was our team’s project manager and failed miserably. We only spent $8,000 of our $20,000 budget and our structure never stood. After further thought about why our project went so poorly, I realized the importance of one thing my internship mentor stressed to me: Delegation.

While building our spaghetti marshmallow tower, the decisions on design of our structure, when to start building and budgeting were all made by me. Our team discussed strategies and threw ideas back and forth, but the decisions always ended up being my initial idea. As the project manager, I felt responsible to make all of these decisions. Clearly, that approach did not work.

My internship mentor managed the project we were working on this summer. She had little expertise on most of the subjects of our project, so she delegated. We built a team of members from multiple departments with varying roles. She simply posed questions and then let this team of experts make the decisions for her. For example, when deciding on cost, she would have asked the spaghetti marshmallow engineers what they would need in materials and labor to build the desired tower. That information then would have been relayed to management and finance to see if that budget is feasible. The experts then would have conversed, mediated by the project manager (my mentor), until a budget was reached to build a tower that filled the company’s needs. The same would have been done for time. “Engineers, how long will this take to build? Management, how long do we have to build this?” A vision of a structure within an expected period of time would then be agreed upon, decided by the experts.

Here is the key takeaway: As a project manager, do not try to answer all of the important questions on your own. Focus on asking the important questions to the right people. Be a Delegation Expert. My first thought when building our spaghetti marshmallow tower was, “How can I build this?” If I could do this exercise again, my first question would be, “Who has engineering expertise?” and then I would have asked them, “How can we build this?”