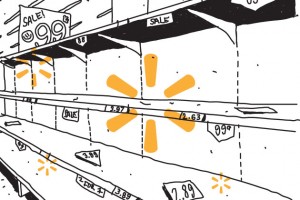 Have you ever gone to the store only to find that the shelves are bare and you can’t get what you’re looking for? Many Walmart customers nationwide are complaining that they cannot find what they need at their local Walmarts. Because of this, Walmart lost many of their customers to their competitors such as Kohls, Target, and

Why the empty shelves? Since the recession, Walmart has tried to cut costs. To accomplish that, Walmart cut staff. “In the past five years the world’s largest retailer added 455 U.S. Walmart stores, a 13 percent increase, according to company filings in late January. In the same period its total U.S. workforce, which includes employees at its Sam’s Club warehouse stores, dropped by about 20,000, or 1.4 percent.” So as Walmart continues to open new stores throughout the country, they also continue to cut their workforce. This has had some severe consequences. Some of these include longer checkout lines, less help available to customers throughout the store, and disorganization.

These issues have caused Walmart to place last amongst department and discount stores in the American Customer Satisfaction Index. This is the sixth consecutive year that Walmart has tied or taken the last spot. The lack of customer service due to a lack in staff is definitely to blame. Walmart has so much inventory in back, but not enough staff to stock the items on the shelves. Customers cannot find what they are looking for and cannot find an employee to help them. When the customers go the check out, they are faced with long lines and few checkout lanes open.

In the past, other retailers have viewed labor as a controllable expense that is an easy way to cut costs. In the early 2000s, Home Depot had the same thoughts as Walmart. They could easily cut expenses and grow profits by cutting staff and relying on part time workers. Eventually customer services and satisfaction plummeted causing sales growth to fall throughout established Home Depots.  If Walmart continues to cut costs by cutting labor, they could face the same fate as Home Depot.

If Walmart continues to cut costs by cutting labor, they will fall into a vicious cycle. With no staff to stock the shelves, the company cannot sell things that are not out and made available to customers. Eventually customers will choose Walmart’s competitors over Walmart for all their shopping needs. A change definitely needs to occur or Walmart will have many problems in the future. What are some ways that Walmart can cut costs without cutting out customer service and satisfaction?