The article begins with a story that perfectly illustrates the dire circumstances so many business owners found themselves in after Hurricane Sandy passed through the East Coast.  Kristy Hadeka and Sean Tice – co-owners of Brooklyn Slate Company, a company that produces slate cheese boards – had been preparing for the holiday season when Sandy hit.  As a small business, the company depends on the revenue generated during this time of the year.  According to the article, holiday sales typically make up 75% of the company’s annual revenue.  Instead, they found themselves dealing with a litany of other issues – a depleted staff, damaged inventory, halted UPS shipments, and even customer emails requesting arrival times for orders.  Kristy and Sean even had to locate missing merchandise that was being transported to a Whole Foods store in Massachusetts.

Another small business, Linda the Bra Lady, had a similar experience. While the company did not experience any physical damage, co-founder Carl Manni explained that they did suffer financially as a result of the storm.  Manni explained that due to damage sustained to several of his vendors’ warehouses, he was unable to procure the inventory he needed to fill online orders.  He consequently had to back out of the orders – a decision that will cost him approximately $50,000 for this week alone.

Outside of lost inventory and stifled supply chains, the looming issue is that many of these business owners did not have insurance that covered a disaster of this nature.  Consequently, many small businesses will have to file for bankruptcy if they do not receive disaster relief funds from the government.

Ultimately, I feel that small businesses have a much harder time dealing with catastrophes of this nature.  Whereas large retailers can reroute their supply chain or reorganize resources to soften the punch Sandy packed, small businesses do not have the necessary resources to reroute orders or replace inventory – especially given the current state of the economy.

* The information provided in this post was drawn from the following New York Times article: 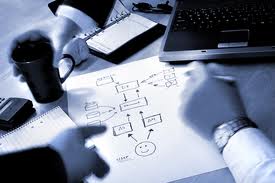 On our third and fourth week of classes, I found learning about the precedence diagram, business strategy, and forecasting extremely interesting and helpful. In one of my school organizations, I work with a team to plan several cultural events per semester; and a problem we had last year was that we had to cram many tasks a week before the big event. Also, we planned for 400 people when only about 250 actually attended. I believe learning about these operational components will help me better plan for events this year.

As the precedence diagram, business strategy, and forecasting relate to the general idea of having a business plan, I found an article on ‘Forbes.com’ that seems to disagree with having a business plan at all. The article, “Bob Dorf: Throw Out The Business Plan”, talks about a “serial entrepreneur” who gives a speech about business plans being all fiction. He believes that time and money should not be spent on forecasting the number of customers a new start-up business will have because these forecasts are never right. Instead, businesses should spend their time and money on gathering “aggressive feedback” to truly understand whether a product would or would not sell. A start-up team should have members falling into one of the three categories: the hackers, hustlers, and artists. The hackers are for coding, hustlers for gathering feedback, and artists for designing graphics.

In my opinion, I do agree that sometimes forecasts can be extremely off; however, I also believe that there is no harm to having predictions. Forecasting allows you to set prices, deadlines, and goals to reach. With this, I do not disagree with his advice. Aggressive feedback should be taken and I like the three categories he’s created. In another post that I have commented on, I learned the importance of product design and how it suades the decision of a consumer.

Should a company have a business plan? Should a business look at past data to forecast or possible future data through feedback?

Shortly after the economic downfall in 2008 began, Tom Sesti started Bandals, a new footwear company through which he introduced a line of women’s sandals with interchangeable  multi-colored tops – their slogan being “Changeable by design.” The sandals were an instant classic and the five employee company was suddenly facing manufacturing and raw materials cost increases of 15-30%. Sesti knew he needed to figure out a strategy to deal with this issue – and two strategies he came up with involved moving the company overseas or introducing a new product.

Tom Seski took a look at how to improve the quality of his product and the strategy of where to locate his business. He gave a lot of thought about how to penetrate new markets. He realized if he could take something like sandals, which are sold mainly in warm months, and make them something one can wear year round, then they wont only sell for one season. Two ways he did this were by adding jewelry that could be taken off and used with other shoes such as boots in the winter, and also expanding his company to new countries where the weather was warm year round.

It took a lot of hard work and research, but Testi was able to figure out how to effectively manufacture his product as well as expand it to multiple countries. He estimated the cost of making his jewelry in China, the cost of promoting strategies, and assessed how many items he could sell and determined it was possible to break even in a year. He also estimated the costs of expanding his company to 15 countries overseas. These strategies had a high chance of being successful, so he decided to go about implementing them.

Tom Sesti’s operation strategies proved to be successful. Through the use of focus groups, multiple designs, bio-mechanicals, market research, marketing campaigns, location strategies, and design of goods and services, Bandals was able to improve revenues by 250 percent and more than triple annual profits. Sesti figured out cost effective strategies that addressed two major obstacles he saw within the seasonal footwear industry and made the right decisions on how to put his plans to action.