The real estate growth in Bahrain has always been a topic of controversy amongst us locals, mainly due to our Kingdom’s tiny geographical size and population. With all these huge projects being erected one after the other, who is actually occupying them, and are the costs justifiable? …But I digress.

Back on topic; with the steady growth in real estate in Bahrain, many great projects come to mind: “Amwaj Islands”, “Durrat Al Bahrain” and “Riffa Views”. However, one of the more recent projects, (still under development in fact), stubbornly stands out from the rest: “Diyar Al Muharraq City”.

A project within a project, the “Bahrain Dragon City” is a multi-million district built on 115,000 square meters of land located in the southwest corner of Diyar Al Muharraq. It will consist of a shopping mall, numerous warehouses and a dining venue. The project focuses on delivering Chinese goods and services to the Kingdom in a single wholesale and retail trade facility. The developers aim to fully pre lease available space to prominent retailers from China and the Kingdom.

The project gets its name from its adoption of the unique, but undeniably gorgeous Chinese architectural and cultural references. The mall will host 700 individual retail stores, while an area of 5,000 square meters is designated to warehouses. The dining venue is a 6,000 square meter Asian-themed dining street with a car park capacity of 1,500 vehicles.

Set to be completed through 2 phases, phase 1 (which includes the Chinese themed mall) has already been initiated and is scheduled for completion by the end of June 2015. Phase 2 sets to double the size of the project to 335,000 square meters.

The project has faced some difficulties though:
–“Due to the exposed coast allocation, strong winds had slowed progress for a short period.” Terry Carroll
-350 residential apartments are under construction adjacent to Dragon City. They need to be completed by the time the mall opens, straining the project’s time management further.
-The Dragon City has met with some disapproval from local merchants, who signed a petition against the project in 2014. They fear that the Chinese traders would eat away at their customer base and businesses.
-Moreover, if you have ever been to Dubai, the project is undoubtedly similar to “Dubai Dragon Mart”, and it admittedly follows in its footsteps. However, the success of Dragon Mart in Dubai is largely due to the energetic tourism industry in the sovereign state, coupled with the fact that in Dubai “each year the number of tourists from China has grown 15-20 percent”. David Macadam

With the issues mentioned above I often find myself contemplating the following:
What are the measures taken to recover the lost time and streamline time management? Is the Kingdom’s tourism industry even remotely as hyperactive as the one in Dubai to justify the costs of the project? What is to be done to win the approval of the local merchants? 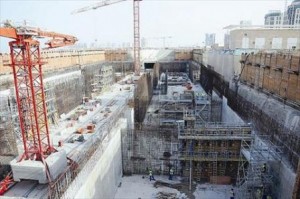