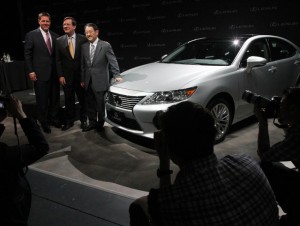 Many people know that Lexus is the luxury brand that Toyota owns. The company is planning on opening a new production plant in 2015. The plant will be located in United States. Although, Toyota does have plants make Toyota brand cars, this will be the first US plant that Lexus will open. It will also be the very first time the Lexus ES will be produced outside of Japan. This is very interesting because most companies would look to go to countries with cheap labor and flexible labor laws. In the US, there are a lot of regulations that protect workers. What would cause Toyota to bring Lexus in the US?

Just as we learned in class, there are a couple reasons why companies would globalize. Some of the reasons are to reduce costs, improve their supply chain, and provide better goods and services.

It is reported that “[Lexus] will receive as much as $146.5 million in tax credits, significantly bringing down the overall cost of the investment. Bloomberg reported earlier this week that Toyota would have to invest $531.2 million and add 570 full-time jobs in order to yield the full value of the package”. The tax credit is definitely one of the main reasons why Lexus would want to come relocate in America. This move will help reduce costs such as shipping the cars from overseas by improving their supply chain. Also it will help provide a better service for Lexus owners because the plant is not located domestically.

Not only does Lexus benefit from this new plant but so does the people of Kentucky. In order to be efficient and complete their goal of producing 50,000 per year, they will need to hire a lot more workers. This will create a lot of new jobs for the people of Kentucky. Everyone seems to be pleased with the move and there have been no ethical problems with it. Even the state governor said, “This is a great day for Toyota and for the commonwealth of Kentucky”.

Toyota is also looking to retain its title as the “world’s biggest carmaker” because Volkswagen is closing the margin between them. If the opening of the North American Production Plant, this will give them the edge they need. Hopefully with the success of the new US plant, this will cause more companies to relocate here.

Do you think this was a will be a smart move for Lexus to produce their cars for the first time outside of Japan? What would some of the concerns be for the carmaker?

Do you think the US government is giving these large tax credits to help stimulate the economy by creating new jobs?