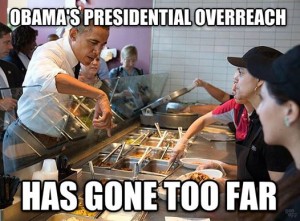 Step into Chipotle during lunch or dinner hours (or after class), and you can almost guarantee a line that stretches far past their service counter. With articles such as one from Business Insider teaching consumers how to get more food for the same price and the story of President Obama committing the ultimate faux pas while ordering his burrito bowl, it’s safe to say Chipotle has become a cultural phenomenon.

Chipotle can contribute their success and expansion to several factors such as a clear brand message that commits to serving fresh, healthy and natural food at affordable prices; however, depending on external funds by franchising their restaurants isn’t one of them.

With just around 1,600 locations, which pale in comparison to many popular franchises (Subway has 43,000 locations), why hasn’t Chipotle considered franchising?

The answer is simple. They don’t need nor do they want to. So how have they managed to succeed among the sea of franchises?

One of Chipotle’s greatest contributing factors lie within their management approach called the restaurateur program.

Starting in 2005, shortly before their divesture from the McDonald’s Corporation, the company implemented a system that heavily relies on internal promotion to motivate their employees and provide opportunity for career growth beyond most fast food corporations. The same year the restaurateur program was initiated, it was quoted that 20% of managers gained their position through the program. As of 2013, 86% of salaried managers and 96% of hourly managers were internally promoted.

A general manager can only rise to the rank of being a restaurateur based on their performance of how well they manage their restaurant and staff. After being selected, restaurateurs make well over $100,000 and are given a $10,000 one-time bonus, stock options, a company car and an additional $10,000 for each of their crew members that are promoted to general manager.

I think employee motivation is a crucial factor that’s often overlooked to successful operations management and have found it refreshing to learn that a company I frequent so often offers great employee incentives and benefits. In addition, not conforming to industry norms by trusting the skills of their employees to adjust recipes such as if a crate of jalapeños is hotter than usual, in my opinion, creates a superior product, service and experience. Do you think Chipotle chose the right track by not franchising their restaurants?

On the other hand, it takes more than a management handbook to keep a system running smoothly. Recently, a Chipotle near Penn State University experienced almost their entire management and crew resign citing near sweat-shop working conditions due to understaffing. This forced operations to shut down. Do you think this was an isolated incident by poor management at this particular location or are there bigger problems within the Chipotle Corporation?

Overall, what do you think of Chipotle’s restaurateur program?