Some investors will ask is the CEO worth all the money he is getting paid? Its common for every investor to know how much the board of the certain organization is getting paid. The controversy I came across was a huge new contract that my idol, Satya Nadella got a package of 91 million dollars for his new salary. Satya Nadella is an Indian American, he is the third CEO of Microsofts history, following Bill Gates and Steve. Stock holders may think that the amount of money he is getting paid might be overpaid, but also anything that happens to the company or the final choices to be made for billions of dollars including big time deals and goals he has to hit in order to keep that stock value alive and support the company is also a huge deal. “The controversy over excessive CEO pay this week hit Satya Nadella, Microsoft’s (MSFT) leader for the past nine months. Institutional Shareholder Services, a well known advisory firm, urged big investors to oppose 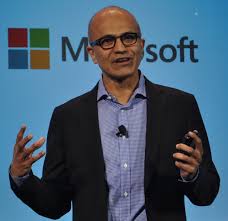 Nadella’s 2014 compensation package in a non-binding vote at Microsoft’s annual meeting next month.” Nadella, got a package of cash and restricted stock worth almost $91 million, according to Institutional Shareholder Services. Much of the stock won’t vest for at least five years, but ISS said the total was far more than CEOs of comparable companies earned and not tied closely enough to the performance of Microsoft’s stock. In the beginning stock holders might think that is a substantial amount to give to someone in their first year especially when he hasn’t proved anything or given a situation where he really had to make a tough choice. Seemingly it seems to be that name CEO, is just a money machine, but realistically it means to have a lot of patience, understanding, and extremely strong leadership. Microsoft defended the pay package, valuing Nadella’s compensation for the year at less than $12 million and noting that the stock awards ISS criticized would be deferred for five to seven years and would increase or decrease based on how well the company’s stock performed. Nadella would get 600,000 shares in 2019, 2020 and 2021, a total of 1.8 million shares, if Microsoft outperformed 60% of the stocks in the S&P 500 Index, for example. But if Microsoft only beat half in one of those years, the award for that year would drop to 450,000. And if it only beat 30% or fewer, Nadella would get 150,000 shares a year. After taking in that information, would you as a stock holder want to pay your CEO that much or not?

Would you agree that a CEO would have to show he is worth that much before you pay him or would you give him that incentive to do something great?

Nearly 20 million Americans attend college each year. Of that 20 million, close to 12 million loan annually to help cover costs. In Europe, higher education is more highly subsidized for students and funded by the government. In parts of Asia and South America most post secondary education is still private with little funding from the governments. It seems like the United States is creating a huge market for student loans to become a business. We ask ourselves is this ethically right to have that high of an interest rate for students who graduate working.”The average sticker price in 2009 was about $35,000, but the average price people actually paid was around $21,000.” It’s hard to estimate what college really cost.

Are student loans even a choice anymore? Seems like now 90% of the people who graduate high school try to pursue some sort of degree or certification of a higher level of degree then a simple High School Diploma. Student loans have become a business itself. Banks daily are robbing students by setting an interest rate so high. Many students who I know personally have graduated with top degrees are struggling, competing with hundreds of other students for jobs that will only probably pay the 30-40 thousand a year. The student debt is just not fair, the rates are higher then ever before. Even if one were to find a job immediately upon graduation, depending on his/her school, they could spend years just trying to pay off their loans. Banks, in a sense, are robbing students of their financial freedom, and essentially are creating a form of “debt-slavery”.

Student debt is not just a financial burden one takes on in order to get a good education anymore, it has consequences that reach far into the future. In the past fifteen years student debt in private schools has been raised from 50 billion to now being more then double at 120 billion dollars. Now for the Public schools it has reached almost the same from 45 billion to more then doubling to 100 billion dollars. That being said, I believe banks are the main reason why students cannot afford a higher education as well as pay it off. At the end of the day the banks job is to drain every dollar and gain every percent out of our pockets. We can ask ourselves is this Social Responsibility of business? Is it ethically right to turn education into a business?