Last spring, Amazon.com decided to end its venture with one of its largest third party sellers, DAB Unlimited. Amazon logs more than two million sellers, where nearly half of all of its merchandise is sold by volume through Amazon.com. Like DAB Unlimited, third party companies use Amazon’s website, warehouses and payment systems to sell their goods over the Web, allowing the retailer to offer a much broader range of products. This type of strategy has caught on to other retailers such a Staples Inc., Wal-Mart Stores Inc., and Sears Holdings Corp.

DAB Unlimited mainly offered vitamins, supplements, weight-loss pills, pet-care products and children’s toys. In 2010, DAB racked in more than $200 million in sales alone. The fast growth of companies like DAB explain how Amazon can generate mass amounts revenue or even increase their revenue by 25% like they did in 2008.

The biggest risk of this venture is that Amazon cannot control the overall customer experience. Between 2009 and 2012, Amazon received dozens of complaints from people claiming that DAB had sold them counterfeit or mislabeled items, according to internal Amazon documents filed from their bankruptcy case. But although Amazon cannot control the full customer experience, Amazon did take matters into their hand in 2011 forcing DAB to stop selling products on their sight after DAB sought bankruptcy protection. 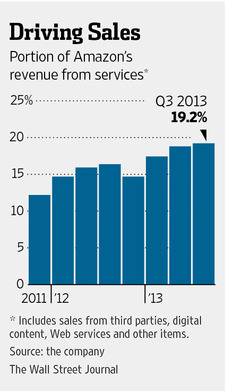 But third party sellers like DAB shows the true risk that Amazon faces when it comes to customer service. One specific customer reported that DAB was selling fake Gillette Mach3 razor cartridges, according to the Amazon documents. However, there are less than 1% of DAB shipments that get flagged for problems.  During one instance where a customer took some diet pills and felt adverse side affects, Amazon took it upon them to investigate and sent a warning to DAB with the concerns. At this point, Amazon, based on recommendations, decided to suspend DAB’s selling privileges. Johnson & Johnson last year suspended sales of scores of consumer products and over-the-counter medications to Amazon because it said the Web retailer wasn’t doing enough to prevent third parties from selling expired or damaged J&J products.

Although the Amazon account manager pleads a blind eye to the situation, he is now willing to help improve third-party sellers in sales and in ratings.  Amazon is still currently not doing business with DAB Unlimited. However, DAB Unlimited still has its storefronts open and has been continuing to get great ratings from customers since 2006. It is still not clear if Amazon will look to do business with DAB in the future.

13 thoughts on “ALL Fingers Point to the Middle Man”