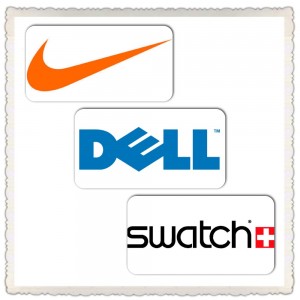 To increase sales, most manufacturers integrate the most common appealing features into their products to move units.  Conversely, the ideology of mass customization is that every aspect of a product will be tailored to a customer specifically.  For example, Swatch, the world’s largest watchmaker company, produces standardized internal mechanism components en masse, but also offers a wide variety options such as colors, straps, faces, and so on. The idea of a personally tailored product has been adopted by prominent vehicle manufacturers, computer manufacturers, and many more.

Dell, as another example, has demonstrated the idea of mass customization and utilizes it to allow their customers a very personal PC experience. Dell allows customers to assemble their own desktops and laptops online by customizing components such as, hard disk, graphics cards, processor, memory (RAM), and other options before assembly and delivery.  Amazingly, Dell manages to offer a fair amount of variety with their components, but achieves the lowest cost of production in the entire industry, leveraging the benefits of e-commerce and mass customization in selling directly to customers.

Both Swatch and Dell offer personalized experiences, but these two manufactures do not offer an unlimited number of choices.  Instead, companies learn what sort of spectrum that customers would be comfortable purchasing in and adjust the limits accordingly so that customers will end up happy with both their product and service.

Nike, as the most popular sports equipment manufacturer in the world, pioneered many ideas in the industry of mass customization. In spite of this large number of products tailored to golf, basketball, tennis, and soccer enthusiasts, operations managers at Nike have improved product quality while reducing overall costs. Nike allows customers to customize many of their products. For instance, customers can print their own names and numbers on shoes as well as customize their shoe strings to different color. Consequently, these practices boosted sales of Nike products to phenomenal levels, smartly marrying the links between sales, production, design, supply chain, and logistics.

The greatest downfall of mass customization is wait time.  Considering that each product must be tailored to a specific customer, often being done by hand, it will take longer to be in a purchaser’s possession.  That is where uniformly mass produced products are advantageous, as they do not have to meet a specific criteria.  In addition, most custom products cannot be returned to a manufacturer, since the item was created specifically for an individual and the likelihood that that product would meet another person’s needs exactly is slim.

Should more businesses adopt the idea of tailoring a product to an individual’s needs?

3 thoughts on “Mass Customization: Tailoring To The Individual”