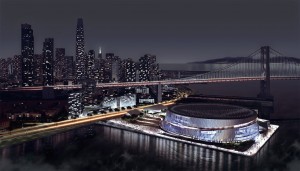 This year the Golden State Warriors made the playoffs for the first time in over 5 years.  The time before that was 1994.  The Warriors have been struggling with fan attendance as well as performance in the last 20 plus years. Last year before the 2011-2012 season the team was sold to Larry Ellison the CEO of Oracle and Joe Lacob. With brand new ownership and team attitude, the Warriors have shown to be one of the premier teams in the Western Conference this year.  Ticket sales are up to an all time high and the fan following is also some of the most passionate in the league.  It has been confirmed that the franchise will build a brand new arena right on pier 32 in San Francisco.  The construction will start in the next couple years and it is expected to be completed by the 2017 season.  This construction will be personally financed by the two owners and will not need any funding from the city of San Francisco.  From a financial standpoint, is this a smart investment for these two owners? Does one successful year justify the construction of a brand new 500 million dollar arena?  Ellison and Lacob feel like this is the new direction for The Warriors.  Their current stadium is over 40 years old and is located in Oakland.  The Warrior organization believes the economic opportunity is far greater in San Francisco then it would ever be across the bay in Oakland. The state of California really loves basketball because it houses 4 NBA teams.  Golden State in the past has taken a back seat to both the LA Clippers as well as the LA Lakers.  With this  move in the upcoming years, will that propel them to be one of the most popular NBA teams in California.  The new facility will also have space open for restaurants and other businesses just a few steps from the arena.

Right now they are in the planning stages and it seems like  they are a far way from the actual construction of the arena.  They have a few obstacles such as building permits standing in their way.  The owners must have forecasted that the teams popularity will keep growing throughout the next few years.  If the ownerships forecasts are not as high as they predict then this new stadium could end up being a huge disappointment.  A similar situation is happening to the Miami Marlins and there new ballpark where attendance is the lowest in the league.  Do you think the construction of this arena is a smart decision? Will the planning stages take longer than they anticipate? This new arena will definitely bring a lot of revenue to the city of San Francisco, but will it ever make the Warrior organization any money?

14 thoughts on “The New Golden State”