Furby’s were the must have toy when they surfaced around 1998. In 2011, eleven years after the Furby stopped being made, Hasbro was thinking up the Next Big Toy for the upcoming years and after much consumer research and focus groups, the decision was in the reboot the 90s class of the Furby.  The toy that has the ability to change personality by the way the user interacts with it.  Looking back, this gremlin-like toy is probably one of the most terrifying things to give a child, but as the world will have it, Hasbro is recreating the toy for the new younger generation.  Wal-Mart and Toys R’ Us have both put the new and improved Furby on their Must-Have lists for the upcoming holiday season.

To modernize the Furby, the product designers are connecting the concept of a Furby with the “app toys” that will interchangeable work with Android and Apple devices by way of an app to connect that so many children are playing with these tech devices.  The Furby isn’t the only toy redesign Hasbro is working on.  They have a number of on going projects to retarget their toys to correspond with a higher tech level so they are more desirable to children.

An interesting thing to consider is that the Furby was introduced in 1998 and quickly went through the product cycle until the cease of manufacturing in 2000.  Furby’s could definitely fall under the category of all the other “fad” toys that came out in the late 90s and early 2000s that were always the must have toys of the season.

In class, we learned about the product lifecycle and how all products go through an introduction, growth, maturity and decline.  There is no doubt that the original Furby is well into the decline stage because Hasbro stopped making them in 2000.  Because most children who had a Furby in their childhood are now somewhat grown up, Hasbro is able to reintroduce a newly designed Furby into the market to restart in the introduction stage of the product lifecycle.  However, the new market of children is not the only one being targeted.  Hasbro is also marketing to people in 20-year range as a retro toy, even though they are completely redesigned.  The new Furby was released this fall so it will be interesting to see if the product skips the growth stage all together and goes from introduction to maturity because the company has been through the stages of growth such as standardization with the earlier model. 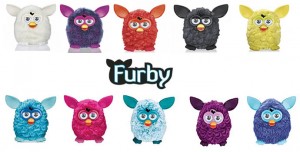 Do you think it was a good idea for Hasbro to recreate the extremely profitable toy from the 90s?  If any of you had Furby’s when you were younger, would you consider buying this newly designed Furby?  Do you think that the Furby has a chance to make its way fully through the product life cycle once again?

10 thoughts on “The Return of Furby’s”