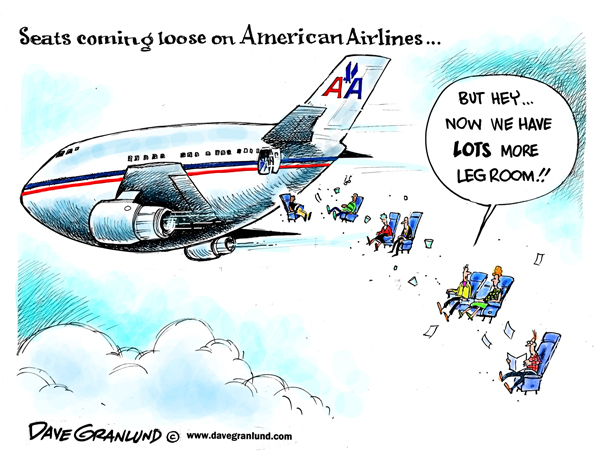 If the airline industry can’t properly maintain the inside of a plane, how can we trust them to take care of the outside of the plane?

Recent financial troubles have not been the only source of difficulties for American Airlines.  The airline is now experiencing complications with their seats.  “A Boeing 757 from Boston to Miami carrying 175 passengers diverted to New York’s John F. Kennedy Airport on Saturday when three seats in row 12 came loose shortly after takeoff.  A second American Boeing 757 returned to JFK on Monday morning after a similar seat issue was discovered” (CNN).  This kind of quality oversight could be the straw the broke the camel’s back for American Airlines.

Initial claims pointed at the saddle clamp “improperly installed on the foot of the row leg” (CNN).  Due to this improper diagnosis, American Airlines inspected a total of 47 Boing 757 Airplanes that were using this type of clamp.  Through this inspection, American Airlines found “that six — including the two involved in the recent diversions — had seats that were not properly secured” (CNN).  It was later discovered that the clamps were not the source of the problem.  Even though this problem was misdiagnosed, it led to a discovery of improper equipment.  Would the faulty equipment been discovered if the problem was diagnosed correctly the first time?   Or did this error lead to a great deal of lost revenue, time, and labor.  These are the types of things that are not in excess for a company dealing with bankruptcy.

The financial implications of mismanaged time and resources are pretty severe for a company with major financial woes.  American Airlines had to ground almost 50 of their Boeing 757 planes.  This is on top of the problem American Airlines is having with their labor force.  American Airlines is in a difficult battle with their pilots union.  The airline suspects that pilots have been filing frivolous reports to cause massive slowdowns.  This slowdown is composed of 12,000 delays and 1000 canceled flights within the month of September.  The question here is whether or not the pilots have been leveraging false safety concerns to improve their union position.  Regardless of the validity of these claims, the airline must address each concern to avoid an even bigger situation.   Being a major airline, American Airlines must deal with problems coming from all directions.  Not only must American Airlines worry about the problems of their own employees, they must also worry about their manufacturers and the partners of their manufacturers.

More and more companies work with various manufacturers to supply them with the parts and pieces required to complete their final product.  It is almost impossible to find a major manufacturer that creates all of the pieces in house that are needed to complete an intricate product.  Many reach out to other manufacturers that specialize in that specific part/piece.  With all of these various pieces, it is very difficult to insure the quality of every one of these different parts.

The seats in question were manufactured by Weber Aircraft.  This Texas based company “manufactured the seats for American’s 757 planes, also made seats for 25 other airlines, including Delta Air Lines, United Airlines, Air Canada and Korean Air Lines”(Martin 2012).  To prevent future problems and issues, the FAA has essentially demanded that the various airlines rigorously inspect their planes using the 11 Weber seat models.  Over time we have learned that in this global economy it is necessary to make manufacturing partnerships.  However, in this case, it is evident that there is a complete lack of quality management.  How can an industry with so many moving parts avoid situations like this?