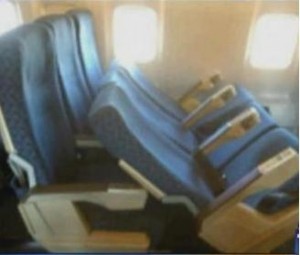 American Airlines has found three separate occurrences of their seats being improperly bolted to the floor during passenger flights. Two of these incidents caused emergency landings, and in one case flipped passenger’s seats’ back midflight. On an additional aircraft, passengers were told to brace for emergency landing after the landing gear jammed shorting after takeoff. As a result of this, the airline has gradually inspected 757 aircrafts. In the past week, American Airlines has taken half of their 757 Boeing fleet out of service in order to inspect the seats. It is great that half of the fleet has been examined, but what about the other uninspected planes? Are they still safe to fly on?

Some people have pointed to mechanical sabotage instigated by recent labor issues. As a result American Airlines mechanics have lost their jobs due to outsourcing, which has people wondering if mechanics have unsecured bolts on purpose. The mechanics union refutes this claim saying that mechanical issues should be pointed the new maintenance procedures.

However, the FAA did note that the first two aircrafts had undergone maintenance, in which the seats were removed and re-installed, recently before the seat incidents.  While this opens a window of possibility to the sabotage claim, it also may indicate human error. It is very possible that these incidents occurred because they were not secured properly, which reflects the management personnel on duty and inspection of mechanical work. As Deming noted, 94% of problems occur because of a faulty system, not because of the workforce. It is possible that the process structure did not allow for sufficient time to review work or added stress to the mechanics process which created the human error.

The recent incidences have caused a lack of trust in both employees and customers of American Airlines, two areas that the airline should strive to satisfy.  Employees are scrutinized for the American Airlines mishaps and may feel like their jobs are unstable while the airline deals with this rough patch. The pilots of the aircraft with the landing gear issues have even been blamed for sabotaging the plane in an effort to sway the negotiations with the pilots’ union. Customers who have been on the defective aircrafts are dissatisfied with the service being provided to them. In one case, passengers were told to brace for crash landing, thinking that their lives were in danger. A crash landing did not end up being used.

It seems as if American Airlines has various issues that they need to resolve, and resole fast if they hope to retain their customer base. While it is not definitive what caused the mechanical issues or if labor negotiations played a part, I do not feel comfortable boarding an American Airlines plane at this time. In the airlines current condition, would you take the chance of boarding one of the uninspected planes?

4 thoughts on “American Airlines: A Battle of Wavering Trust”