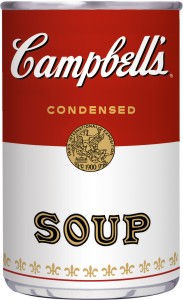 As cold and flu season is fast approaching, it would be fair to assume that soup consumption will rise, not so says the largest soup maker, Campbell’s who has experienced declining consumption of its canned soups. According to research overall canned soup, consumption is down 13 percent and more individuals prefer fresh soups offered at supermarkets and restaurants. In a recent article Campbell’s announced it is will be closing two of their plants to cut cost, which will result in cutting more than 700 jobs. Campbell’s largest and highest production costing plant in California will be the closing in July of 2013 and their spice plant in New Jersey will be transferred to the company’s other spice plant in Milwaukee in March 2013.

In order to maintain competitive advantage over their competitors Campbell’s has decided to freshen up their image to lure younger consumers by introducing new soup flavors and sauces, such as, coconut curry with chicken & shiitake mushrooms and tomato roasted garlic bacon bisque and change from the iconic steel can design to offering their new products in pouches. In addition, Campbell’s has taken notice of the growing culture of consumers who seek healthier and fresher foods; thus, Campbell’s has embarked upon the fresh packaged food category by recently purchasing Bolthouse Farms for 1.55 billion dollars. Clearly, Campbell’s operations management strategy is geared towards low cost production, minimizing cost by eliminating products that are not returning good profits and maintaining competitive advantage over it competitors (supermarkets and restaurants offering fresh soup) with the purchase of fresh packaged food company Bolthouse Farms.

Campbell’s is the world’s largest soup maker that has 19,900 employees globally. According to the Bureau of Labor Statistics, the unemployment rate for August 2012 was at 8.1% still considerably high. 700+ Campbell’s soup employees will be joining the others in the unemployment line starting as early as March 2013. What is your take on soup giants’ operations management approach?