CCRF is a small shelter located in the city of Chicago with a goal of finding permanent homes for both dogs and cats.  CCRF assists animals that are slated for euthanasia and takes in animals from kill-shelters across the Midwest.  We decided to focus on this organization because of the strong interest working with an animal shelter in the city by a majority of the group.  Additionally, one of the group members had adopted dogs from CCRF in the past and the organization was the least funded out of the few options that were being decided upon.

The event we intended to host was a social event in a pet-friendly establishment called Grace St. Tap.  Another group member was an acquaintance with one of the formers owners who was still actively involved with the bar.  Dogs were allowed inside this establishment making it an ideal place for attendees to network with other pet owners and DePaul students.  The end goal of the event was to raise money for CCRF through tickets to gain entrance to the event, tickets for a raffle held during the event, as well as direct donations through CCRF’s website.  At the outset of the project, once Grace St. Tap was chosen as the venue, we projected a best case, worst case, and most likely scenario of $1,000, $500, and $700, respectively.

The event was successful in regards to attendance.  Grace St. Tap is fairly small with a maximum capacity of approximately 50 people.  We were marketing the event with intentions of having between 30 and 40 people attending specifically because of those limitations.  However, with 35 people and 12 dogs in attendance, Grace St. was comfortably busy and a significant increase in either people or pets would have made the environment less conducive to networking.  The tickets, the raffle, and direct donations amounted to $998.95 which just barely missed our best case scenario of $1,000 in donations.

In regards to an overall analysis of our project we were successful in our objective of raising funds for CCRF with achievements just short of our best case scenario.  Breaking it down further, we had individual successes at the project management level through our human resource placement, planning, and teamwork.  We had team members placed with tasks that suited their skills; members in sales/customer service helped market and solicit the event, we had someone with a connection to CCRF and another individual with a connection to Grace St. Tap, and someone with strong project management skills who led the team.  Likewise, we placed an emphasis on preparations for the event itself with plans to handle the various situations that could arise with a large number of dogs, etc.  Finally, we have been part of DePaul’s weekend MBA project for approximately two years so everyone was familiar with each other and trust/timing on various tasks was never a concern.

On the opposite end from effective project management, the main issues we faced was marketing within a compressed timeline and managing the ticket sales due to walk-in attendees.  We choose a date for the event that was about a month from when the project was introduced.  By the time we had everything in place with the event, we had about 1 to 2 weeks to advertise.  This was due to confirming we could host the event at Grace St. Tap on our selected date and having CCRF agree with the flyer we were using.  Also, CCRF is very small organization with only one individual in charge of their website.  That individual was finally able to post our flyer and information on the event about a week before it was to occur.  In regards to managing ticket sales, we were restricted with the small size of the establishment and the ability to buy tickets at the door.  As a team we decided in advance to use a website that allowed people to buy tickets in advance and print the ticket to bring to the event.  This allowed us to track the expected volume up to the day of the event.  However, we really did not know how many people would show up with a ticket purchased in advance.  So, we had to limit our marketing and advertisement of the event.  If we had an additional 40 people show up the day of, the venue would not have been able to hold everyone and we would have to turn some away.  So we mainly relied on using Facebook and LinkedIn to network to our specific social networks.  However, we did have a flyer created to hang up at pet stores, dog parks, vet clinics, etc.; but we limited the total number we ended up posting. 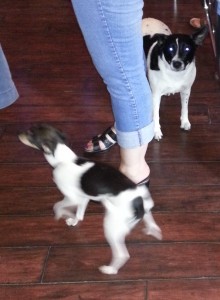 Our main advice to a team interested in hosting a similar event would be to really focus on the timeline you have to work with and the marketing plan.  If you have a month to work with, the overall scope and expectations of your project need to be realistic.  For example, our best case scenario could have been doubled if we had multiple months to plan and prepare.  We would have needed to choose a larger venue, but we could have also advertised the event on a much larger scale.

This advice goes hand-in-hand with our take-a-ways from the project.  First off, it is important to know your team and their strengths/weaknesses.  It is much easier to work on a project where you have past experience with all past team members.  This was especially important with a project that had a very tight deadline.  Also, each individual’s social network is vastly important to the success such as the one we hosted at Grace St. Tap.  A large percentage of the attendees were directly attributable to the social network of someone on the team.  You can always really on your network to either attendee the event, make a donation in this case, or continue to spread the word and promote the event.  Finally, always look for pre-existing solutions.  You don’t always have to “reinvent the wheel” and that may not even be an option depending on the timeline.  An example of this is through our use of EventBrite to monitor pre-sale tickets.  Eventbrite allowed us to monitor the number of people we were expecting to attend the event.  Through the site we could determine how much additional promotion were necessary, either through distributing more flyers or additional postings on social media.  Instead of not having pre-sale tickets and hosting the event without any idea on the number of guests, the use of EventBrite removed the unknowns of either very low or very high attendance numbers.