Facebook is one of the largest social networking website with more than 800 million users worldwide. It was founded
in February 2004 by Mark Zuckerbergand his roommates. The idea behind Facebook is a limited network between college class mates than expanded
to other colleges gradually growing to become the most used social networking service. The way Facebook grown dramatically fast brings the question, how will Mark Zuckerberg carry on his success?

Last class we learnt about the product life cycle and the 4 stages of it (introduction, growth, maturity, 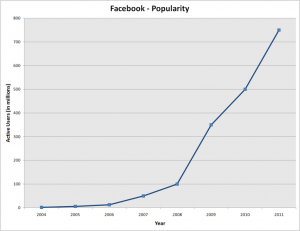 decline). It was interesting to apply that on one of my favorite websites and see where it stands. From the history of Facebook, it’s obvious that the introduction phase was so difficult for such a young and talented group of Harvard students. The product life cycle was never planned or imagined to reach what they achieved today. Facebook moved smoothly to the growing phase, they concentrated on competitive services with a lot of improvements and options especially with more competitors introduced in the market. Users increased rapidly during the period from 2008 to 2012; however this fact made the debate if Facebook reached their peak and how far the maturity phase is.  Facebook appears to begin maturity phase of product life cycle. growth started to stall in some regions losing more than 7 million active users in US and Canada.

In your opinion, where do you see Facebook after 5 years??