An estimated 30,000 people gathered around the Chicago River on Saturday October 4th for the first ever Great Chicago Fire Festival put on by the Redmoon Theater. The festival was supposed to showcase the grit, greatness, resilience and rebirth of Chicago after the historic and unforgettable Chicago fire of 1871. The idea for the event was imagined back in 2009 when Chicago was in the bidding process for the Olympics. 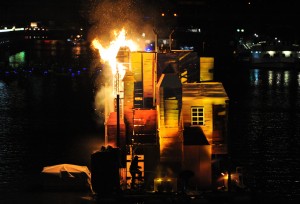 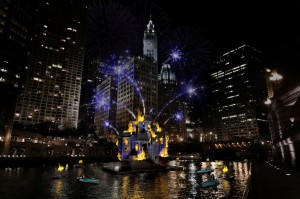 On Redmoon Theater’s website, the event was advertised to be a “Grand Spectacle,” with floating caldrons of fire and a parade of wooden houses that were to be lit on fire and reveal modern metal structures symbolizing the rebirth of Chicago. In addition there was a street market with community artists, florists and bakers before the evening festivities.

The Redmoon Theater shared on its website that, “The inaugural Great Chicago Fire Festival will light up the city with a spectacle of fire celebrating the city’s citizens and neighborhoods on the Chicago River.” However, shortly into the production things went wrong. Two of the three wooden houses failed to catch on fire because of electrical problems that were supposedly due to the rain earlier in the day. Instead of roaring flames shooting high into the sky, the audience watched little sparks of fire float down the river. Some spectators commented to the Chicago Tribune reporter, Gregory Pratt, saying that they had been to better bonfires. (Yikes!) After failing to light the wooden Victorian houses on fire, the Redmoon Theater quickly set off their firework finale to keep the thousands of spectators intrigued.

In the beginning, many people watched in awe as the kayakers and small boats pulled buoys of fire and as the caldrons of fire were lowered down into the river after being lit by Chicago Mayor, Rahm Emanuel. The firework spectacular at the end of the production was worth raving about as well.

Time, cost and performance are the three points of the project management triangle. Redmoon Theater had the cost under control, and plenty of time to prepare for the event, but their performance had no fire (literally).

Obviously, with all major productions something is guaranteed to go wrong, especially with outdoor events. Many are considering this year’s event just a “dress rehearsal” for many more Great Chicago Fire Festivals in the future. Was it the weather or just bad management that caused this 2 million dollar production to crash and burn?

What do you think? Was the weather or the project management team to blame? What could have been done to ensure more success for the festival? Word on the street is that the city of Chicago is giving Redmoon Theater a 2nd chance next year and even increasing their budget. Do you think this event is worth trying to put on again?

8 thoughts on “Crash and Burn – The Great Chicago Fire Festival”