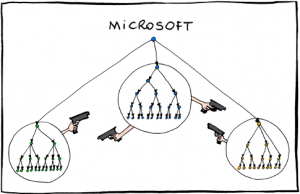 11 thoughts on “Is Microsoft going the way of the Apple?”