The world of fast food has always been about convenience for customers in terms of pricing, locations, accessibility, etc. Burger King has decided to take it a step further by introducing a delivery service in major U.S. Metropolitan areas. The service is now offered in Chicago, Los Angeles, and San Francisco from 11 a.m. until 10 p.m. Customers must order a minimum of $10 worth of food to be eligible for the delivery service.

Ordering food for delivery has been trending for quite some time now thanks to websites like Grub Hub. Although delivery service has been around for many years at places like Pizza Hut and Dominos, it has risen in popularity with more restaurants offering it as well as providing convenient ways of ordering such as via the phone, Internet, or mobile app.  Out of the major fast food restaurants (McDonalds, Burger King, Taco Bell, Subway, Wendy’s), Burger King is the first one to test the market for delivery service.

Currently, Burger King is in the maturity stage of its product life cycle because its competitors are well established and they are focused on innovation. They are forecasting a positive return for their delivery service and hope to be the trendsetters among other fast food giants. The very popular drive-thru option was introduced in 1975 at both Burger King and McDonalds and became a standard at fast food restaurants. McDonalds is clearly untouchable in terms of competition with sales four times greater than Burger King, but Burger King’s delivery service strategy can help them get a step ahead and be the first company to introduce it.

I believe that Burger King is going to have some success with their delivery service with their already established, loyal customers, but will not have a lot of impact on irregular consumers. Although America has always been a nation of fast food, the new trend is eating healthy and being fit. Healthy lifestyles are more and more promoted and gym memberships are on the rise. Burger King’s delivery service does not align with the new trend, but instead makes it easier for people to eat unhealthy.

A way that the company can utilize the delivery service is to introduce healthier menu options. They can then combine the two ideas by promoting the delivery of new salads or other products. Other than that, I do not see this service surviving in the long run. I also do not think that McDonalds will invest in it because if deemed to be successful, then the number one fast food chain would have tried it a lot sooner.

Although Burger King’s delivery service is in the trial stage, they are still following their commitment to convenience for customers. May the odds be ever in their favor. 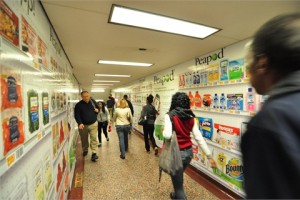