1) Brief description of the project

For our project, we decided to raise money for The Bloc and use the funds to wrap one of their vans in their organization’s marketing materials. In addition, we conducted in-person interviews with their boxers to allow the athletes to practice on-camera, as well as create testimonial videos for the organization to better market themselves.

The first phase of our project was to fundraise enough money so the organization could wrap one of their vans in large decals with their marketing materials. Recently, The Bloc was robbed and they had laptops, credit cards, and one of their vans stolen during the robbery. Wrapping their vans would detract from future burglaries, but it also gives them an opportunity to market themselves as they are driving their fighters to and from practice. After doing some research, we learned that wrapping a van would cost around $4,000. Even though our class was only a five-week course, we really wanted to reach that goal so we could fully fund wrapping one of their vans. We knew this goal was aggressive, but we made it our best-case scenario and created a fundraising page on their website with that goal advertised. After creating the page, we reached out to our network through email and social media asking for donations, and we were able to surpass our best-case scenario and, as of July 16, raised a total of $4,437! We were shocked by the generosity of our network, especially since our fundraising window was open for less than two weeks.

In the second phase of our project we conducted an in-person event during one of their practices, where we filmed testimonials with the fighters to have them practice speaking publicly about their experiences with The Bloc. The Bloc’s main form of marketing is through these testimonial videos of their fighters speaking about how The Bloc has made a positive impact on their lives and how it has helped them navigate their community. Although these videos can be very powerful, the fighters often need help practicing before giving these testimonials. Our in-person event was created to give them an opportunity to practice their pitch and hopefully create some good content that The Bloc could use right away. Our event was held on Saturday July 10th, 2021 at their main facility in West Humboldt Park. While the group was practicing their boxing, we created three zones where we interviewed the fighters. Over the course of two hours, we interviewed nine of their selected boxers for about six minutes each. We found that the interviews were most successful when we interviewed them one at a time, as there was too much noise in the background when we had multiple interview sessions occurring at the same time. Overall, the event went better than expected and the children blew us away by their testimonials and natural abilities to speak on camera. 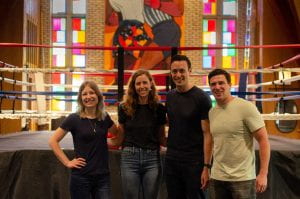 2) Brief description of the charity

The Bloc is a nonprofit boxing club located in Chicago, Illinois. The Bloc spreads the love of boxing to provide resources and opportunities to Chicago’s youth.  The organization’s main objective is to provide mentorship for their boxers. Whether it is prepping them for job interviews, helping them achieve their academic goals or frequently checking in with them to provide advice, The Bloc has become a second home for many kids.  The Bloc provides opportunity for no cost to youth or their families with the intention of expanding their boxer’s horizons with college trips and explorational learning. Since 2016 when they opened, they have maintained 100% high school graduation and college acceptance rates. Whoever enrolls in The Bloc learns to fight and ultimately learns how to fight for their success. 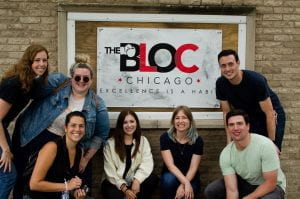 3) Factual analysis of success in terms of project objectives

– Although we did test our camera volume at the beginning, we did not test the volume when there were boxing classes going on in the background.  In our first couple of interviews, we had trouble hearing them in our recorded videos as the organization also had actives going on at that time. As the interviews went on, we developed ways to solve the video volume issue and eventually got great footage.

2) Don’t be afraid to set your goals high!

-We originally had the goal of raising $2,000 and eventually changed our goal to $4,000 halfway through the project.  At times $4,000 didn’t seem realistic but as the project went on, we started to develop more and more passion towards the organization and as a team we continued to push for more donations.

Be sure at the beginning to focus on narrowing your scope down to a realistic project with the time you have.  At the beginning, we had many ideas on how we could help the organization and wanted to do as much as we could for them.  Realistically, we only had 4 weeks to complete this project and our entire team was working full time. Be sure to find the right balance early in the project by developing a realistic scope for your team and the organization.  Communication with the organization is key so be sure to identify an organization that is willing to work with your schedule. Once you narrow down your scope developing a critical path to achieve your goals will always help the team.

6) Photos related to the project 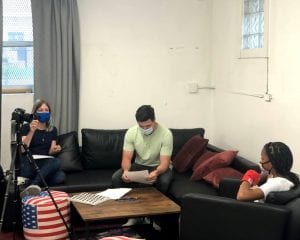