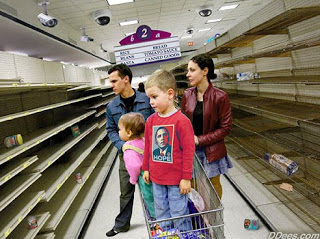 Hurricane Sandy in the East Coast resulted in roads to be closed and shortages of gasoline and groceries in some areas of New York and New Jersey. The damages cost approximately $50 billion. Moreover, the storm also impacted the supply chain of products, which can determine success or failure of retailers during the upcoming holiday shopping season.

A high transparency of supply chain management system from procurement to warehouse to transportation is very important, for the reason that it allows businesses to quickly respond to the unexpected or disaster. According to The New York Times, before the Hurricane Sandy, economists expected 1-2 percent growth of the fourth quarter. After Sandy, they expect that the growth will be reduced by half a percentage point, and this may cause “ripples throughout the holiday season” (Knotts).

However, the storm is no longer an outlier of the supply chain disruption it caused based on a study by the Business Continuity Institute. This is because 85 percent of respondents worldwide experienced at least one disruption mainly associated with weather. The disruption becomes worse and worse “with the increase in megastroms worldwide and the growing complexity of international supply chains and E-procurement” (Knotts).

It is interesting that one third of the respondents do not know where disruptions occur due to the fact that the full supply chain is not being analyzed. A half of respondents said productivity is decreased due to the disruption, and a third said that they lost revenue. Fortunately, automating command and controlling of supply chains can mitigate losses.

The following lists are what companies need to take into account to create an effective supply chain management.

What other factors other than those listed above do you think that companies should consider when it comes to effective supply chain management?

Ford C-Max Hybrid, Ford’s first hybrid-only line of vehicles that was only available in Europe, has now introduced a 2013 C-Max Hybrid model in the United States, which was released in September 2012. Ford invested a huge amount of money in research and development in hybrid technology with an aim to become “America’s most affordable hybrid utility vehicle.” The hybrid model is developed to compete with Toyota Prius, the world’s best-selling hybrid car. The hybrid model base 2013 retail pricing starts at $25,995, including destination and delivery charge. The price is $1,350 below the Toyota Prius v, a van-like vehicle.

A federal government fuel economy rates C-Max Hybrid at 47/47 mpg city/highway while Toyota Prius v and Honda Civic Hybrid were rated at 44/40 mpg and 44/44 mpg. This shows that Ford is able to deliver better fuel economy, which allows it to beat its competitors in the industry. Even though Toyota Prius is the first mover an the largest producer of hybrid vehicles and gain competitive advantage in the market, Ford challenges the “plain styling” of Prius with its “fresh” and “modern looks.” Ford believes that it has developed a better vehicle. Ford C-MAX Hybrid “Says Wheeee” Commercial

The features of C-Max hybrid are shorter at14.5 feet long, bumper to bumper than a regular Prius. Moreover, it has comfortably raised driving position, optional high-grade amenities and smart tech displays. C-Max Hybrid is designed to have more space with the extended cabin and tall rear. A driver does not plug in the C-Max Hybrid, because electric power is generated onboard, stored and then routed out of the onboard battery pack. Another development is that C-Max has a maximum horsepower of 141 while Prius and Prius v have only 98 horsepower. This is enough for a travel range of more than 500 miles.

As I read the article, I can relate it to our recent class lectures. Ford applies many concepts we learned in order to stay in a competitive market. Ford uses a low cost of the product strategy to enter the market. It uses reverse engineering by inspecting competitor’s product to improve its products. It is able to translate customer needs in a current economy when gas prices are high into the product by using quality function deployment. Lastly, it focuses on hybrid vehicles by reducing the use of fuel. This shows that Ford is concerned about sustainability and environmentally-friendly production. Because C-Max Hybrid is more fuel efficient, roomier, cheaper, and faster, I think that it is possible that Ford C-Max Hybrid will be able to beat Toyota Prius, a top-selling hybrid car.

– Do you think that Ford C-Max Hybrid would be able to launch successfully in hybrid vehicle market?

– What do you think would prevent C-Max Hybrid to gain market share of  hybrid segment from Toyota Prius?