Many people want to be entrepreneurs, but many of those don’t really know what kind of business they would start. It’s likely the biggest obstacle in the way of becoming an entrepreneur. Since the dot com boom, and Amazon, companies have made small (or large) fortunes serving just as the middleman. It’s not just for e-commerce anymore either. Basically, any process that can be simplified by a third party can be made into a company in some way.

Take the case of Brian Chesky and Joe Gebbia for example. These two had just moved to San Francisco in 2007 with an idea for a company called Airbed & Breakfast. Soon after, there was a big conference that was booked in town, and all of the local hotels were booked solid. With bank accounts that didn’t match their entrepreneurial ambition, Brian and Joe decided it was the right time to get started and offered up the living room area to their apartment, that they couldn’t even afford, for rent during the conference. The guests slept on airbeds and were served homemade breakfast in the morning. They banked some $800 by renting out their place. Not two years later, that same apartment was now the home base for Airbnb. 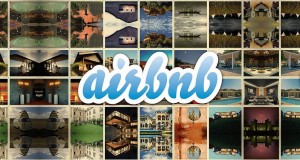 Airbnb is a website that serves as the bridge connecting travelers to lodging. What was once a single room operation to rent their apartment to conference-goers, Airbnb can now put you, the traveler, in a place to stay all around the world. This idea for Brian and Joe could not have come at a better time either, as 2007 was just before the economy went into a recession. Being in San Francisco didn’t hurt either, being that it is basically the technological hub of the country (possibly the world), so a startup like this is well-suited for Silicon Valley. Also, being an internet startup provided immediate benefits as well. Being that this was taking off during the biggest economic downturn of our time, the low overhead of an internet company was certainly helpful in getting Airbnb to progress, and being online, instant access to customers and their feedback was available. Advertising was also available at the click of a mouse.

This service, and services like Uber and Lyft, just prove that with technology the way it is going today, if you can find a way to simplify a task for someone, or just make things more convenient, you could start one of these so-called “middleman companies”  and find yourself one day a partner in a multi-billion dollar company.

Do you utilize the services of these middleman companies? What attracts or detracts you from doing so?

4 thoughts on “Pasting the Middleman Back In”