Operations managers often strive to improve the company’s performance in some way, but at times, their efforts become unsuccessful and often fall short of the company’s goal. In a WSJ article, it says that 60% of companies who have used the six-sigma process (a quality control procedure) have failed. When putting together a project plan, participants (employees) are often excited at the beginning to learn about the new procedures, but as they are pulled to their max, the excitement quickly dwindles and they lost motivation and the effort needed to complete the project successfully. This is referred to as the stretching phase of the six-sigma system. Towards the middle of the project was when top managers really get involved and begin monitoring the employees progress. During this time, the team focuses on precision rather than quantity. Once they perfect their tasks, their quantity is expected to begin going up and the project is seen as successful. During this middle phase however, is also when managers begin to over look other projects and focus on other groups of workers. This is when precision & production become unstable and the project begins to fail because employees record their achievements inaccurately. This is referred to as the yielding phase. During the third  stage of decline, failing, the project often gets stretched to its limits, excitement is no longer there, inaccuracies are constant, and the production is at a standstill. The project can no longer go on and can no longer be successful due to the lack of effort by the team members, executives, and advisers. At this point, it is common that the project has lost its funding due to its lack of progress.  It is suggested in this article that the improvement teams have no more than six to nine members and that they be monitored by an improvement supervisor who knows how to handle situations and projects like these. The article also suggests that executive employees monitor the successes and failures of the teams work in order to make accurate assessments on the status of the project. By relying on only one person (the executive) to record the accuracy of the project, the team is able to eliminate any inaccuracies that may have occurred. After assigning team members, projects should begin within six to eight weeks to ensure that they get the proper funding and attention needed to be successful. If projects push their start date out too far, it is common that the resources and funding needed will be spent elsewhere and that team members will loose interest and have conflicting goals with each-other.  What do you think the best way to set up a team is? 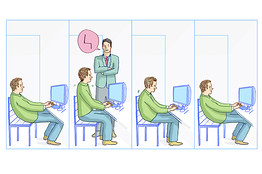