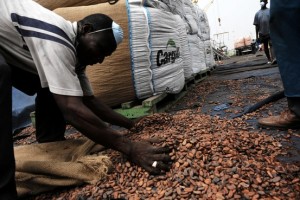 For all of you chocolate lovers out there beware: there may be a flaw in Western chocolate manufacturers’ supply chain management of cocoa. Productivity is not at the levels it needs to be to satisfy manufacturers and consumers. To better put this into perspective, Mars has found that if the levels of productivity remain the same as today, by the year 2020 there would be a shortage of 1.1 million tons of cocoa. If this occurs and current productivity levels of cocoa trended into the future, the cocoa farming business will not be headed in a promising direction.

The disconnect lies within cocoa faming itself. There is little incentive for cocoa farmers to continue in their line of work because of the competitive rubber industry. It is considered a less uncertain industry with a longer crop season by about four months. On top of this, the wage for both types of farming is roughly the same.

The other constraint of the industry is the high risk for disease outbursts. This is partly due to the inadequate access of much needed fertilizers for the cocoa crop.

Cocoa-farmers do not come anywhere near the crop’s capacity since their utilization is only around 60%. Cocoa manufactures have recognized the scarcity as a sincere problem since in many growing areas more than 40% of the cocoa crop is destroyed due to vermin and disease.  One would hope that this type of scarcity could be due to assignable variation that can be improved by subtracting bad causes.

How would you react if chocolate turned into a luxury good instead of an affordable snack due to flaws in the supply chain management?

Chocolate manufacturers are looking to provide solutions for productivity in the cocoa-farming realm. Many companies like Mondelez and Mars have invested millions in education programs in hopes to increase productivity and decrease disease-ridden crop. Mondelez has gone as far as hiring students from universities for these cocoa programs to target efforts toward younger generations. This seems to be an efficient approach, given the fact that peer motivation is a convincing form of motivation.

Another potential solution was Ivory Coast’s decision to set a price minimum for cocoa. This was an astonishing action that stresses how essential cocoa farmers are in the industry.

It is hard to believe that the issue has gone this far. In my opinion, action should have been taken much sooner. The uphill battle is much worse now that efficiency levels have sunk so far below maximum capacity.

Do you think that these efforts put forth by chocolate manufacturers will be enough to save the chocolate industry?

What else can be done to improve the supply chain management and productivity in the industry?

Have you noticed any other flaws in the cocoa/chocolate industry besides the supply chain management?

Which action will have a greater affect on the industry: a price minimum or cocoa farming education programs?

The Chicago Public Schools system, commonly referred to as CPS, has received some harsh criticism after declaring that there would be massive school closings before the 2014 school year.  The CPS school district has decided to close 53 elementary schools in the Chicagoland area.

As a result of the school closings, hundreds of teachers will lose their jobs or will be transferred to a school that will receive the students from nearby closures.  Not only are the teachers affected by CPS’s decision, but parents have also begun to express their concerns as well.  The current students of closing schools will experience travel distances that are almost double their current commutes which parents believe will add unnecessary danger.

Parent reactions to the school closures have mostly been concerned with the safety of their children.  The surrounding communities have also expressed similar concerns to CPS about overcrowding in the receiving schools and the costs of improvements that will have to be made to these schools. The largest protests have come from the Chicago Teachers Union.  The union is fighting against the massive layoff that will follow the closing of 53 elementary schools and has filed a lawsuit against CPS.

Even through a lawsuit from the Chicago Teachers Union and overall disapproval from the surrounding communities, CPS continues to stand behind their proposal to close the 53 schools.  Why is CPS adamant about the need for closing the 53 schools?  CPS has stated that currently the district schools have the capacity to serve 511,000 students.  However, during the 2013 school year, only 403,000 students were enrolled in the school district.

According to these statistics, the CPS school district is only utilizing 78% of the possible capacity.  The shortage of student enrollment has been very costly for the CPS school district and a problem that needed to be addressed.  In any industry, not utilizing 22% of possible capacity would be a concern.  In such a situation, many companies would try to minimize this shortage.  Two strategies for reducing costs and matching capacity to demand are making staffing changes and closing facilities.

Capacity is a major factor that must be addressed in order for a company to remain profitable.  The Chicago Public School system is attempting to minimize costs and is responding to this situation just as any other business would.  The strategies CPS has elected to implement are generally accepted in many other industries.  The closing of facilities and employee layoffs happen quite frequently throughout the country, but the CPS system is facing much more opposition than other companies usually experience.

Do you think that CPS is facing unfair criticism?

After seeing the enrollment figures, do you believe that the CPS system is acting appropriately in closing the schools?

If not, what would you recommend as a better solution to the issue?