With the second quarter of 2013 well under way  companies are beginning to put out their first quarter earnings.  271 companies of the Fortune 500 which make up the S&P 500, have reported a earnings growth at 3.9 percent, 2.4 percent higher than the forecast of 1.5 percent. “Some 69 percent of the S&P 500 have beaten forecasts, once again conforming to the pattern of lowering expectations enough to “surprise” by beating them. The 69 percent figure exceeds the long-term average of 63 percent. This has been the pattern for the last 15 quarters, with growth estimates at the beginning of earnings ultimately being beaten by at least a full percentage point.” According to the article, companies are purposely low-balling their estimates only to beat those forecasts at the end of the quarter. This has held true for the past 15 quarters and seems to be the trend going forward. Investors and stakeholders will continue to be surprised and will be looking at positive earnings growth at the end of the quarters. It seems to me as if investors don’t really mind the idea of that since these earnings reports has caused the S&P 500 to rise 1.2 percent since the first company released its earning back on April 8th. 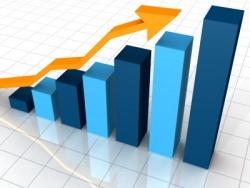 Though the companies that have posted earnings have had a good growth, the companies that are yet to report are expected to have a 0.4 percent decline in earnings. Among these companies could be Walmart and Home Depot since they have not posted their earnings yet. First quarter revenue was projected to have 1 percent growth but instead is expected to fall 0.3 percent. Even though, companies have had a success when it comes to profits, revenue forecasts have declined, which goes to show that many companies still have a decline in sales. “’It does concern me. It’s not sustainable over the medium or the long term. There’s only so much companies can do to sustain growth without increasing sales,’ said Paul Zemsky.” They are able to get higher earnings through cutting costs and expenses but not through an increase in sales. This poses a threat to the economy in coming quarters because it will mean that companies will be hiring very less now since they will try their best to cut cost.

After reading this article, I felt that companies have to better forecast their earnings since there is such a gap between the forecast and the actual amount. They may have to use a different forecasting technique to come up with their earnings projections so that there isn’t a “surprise” when the actual numbers come out.