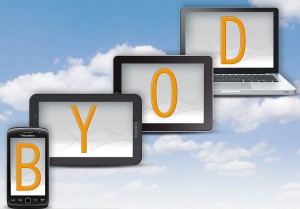 While reading an article the other day, I came across a new way that companies are now implementing to save money. Over the past few years with the growing popularity of smartphones and tablets, many companies’ IT departments have been trying to resolve a problem of integrating personal devices at the workplace and analyzing how it can benefit the company. According to Gartner, a research and advisory firm, “has predicted that at least half of white collar employees in the United States will be using their own devices for work by 2017.”

Some advantages that come with this integration are increased motivation and productivity, less training on devices and programs, and access for employees to connect wherever and whenever they want.

Employees handle their own upgrades

This saves the IT a considerable amount of money each year. And the employees are happier because they can choose when they want to upgrade and to what device to upgrade to – instead of being at the mercy of the IT guy.

When companies purchase electronic devices (computers, smartphones, and tablets), they always tend to overbuy to side on caution so that every employee will have a device and not to create a lag time for incoming employees. This is a waste of money for the company and can be eliminated since employees would be responsible for supplying their own.

Training costs go down when employees are utilizing technologies with which they are already comfortable, which would curb the time it takes to learn a new program or app. And in some cases, training can be altogether eliminated from the books.

As companies are continually looking to improve their processes and save money. I feel this is an inexpensive way to lower costs, be more productive, and keep happier employees.

Becoming more lean and agile is a common theme for many companies and involves maximizing efficiency. Mattias writes that the two key components of lean and agile are the last planner rule, which is when those who execute the work should plan it, and control through transparency, which is making work and workflows more visible. At my company I see a lot of control through transparency as a way to get as much project related information out to everyone involved with the project. SharePoint is the primary tool used to help achieve this and allows the project manager to more efficiently relay information to the team. This helps to make sure that everyone is in the loop throughout the duration of the project and is kept up to date with the progress.

The final two trends are improving activity streams and creating a social environment. Activity streams involve the use of technology to harness any information or knowledge related to a project and sharing it. This is an effective trend that can be used to complete deliverables more quickly and efficiently and also to help relay any important project related information or experiences. The social aspect of project management is a trend that continues to grow and involves the use of technology and management to better understand social behaviors as a way to motivate people and improve their use of technology to improve efficiency. In particular, the studies of human behavior and technology are crucial to the organization of a project because one of the tasks of project managers is to motivate and shape the behavior of those on the team as a way to achieve success.

What are some other project management trends that you have seen taking place?

Recent trends indicate that cyberattackers are increasingly targeting small, startup businesses as larger companies have ramped up IT defenses in recent years. According to a report by cybersecurity firm, Symantec, “cyberattacks on small businesses with fewer than 250 employees represented 31% of all attacks in 2012, up from 18% in the prior year” (Link 1). As soon as a business sets up its website and email domain, cyberattacks are triggered almost immediately. In fact, by the time a business is five months old, it has already been targeted by hundreds of spam phishing messages and Malware attacks and, within ten months, most companies will have been infected with Malware. (Link 2). Hackers will also use attacks known as Ransomware, where an attackers locks up company computers and networks demanding a ransom to stop the attacks. Computers are not the only targets of these attacks, however. With the proliferation of smart phones and mobile devices in the business world, many attackers are now using malicious software to infiltrate these mobile devices in order to steal valuable information. Verizon’s RISK team has indicated that this trend of increasing attacks on small startup companies has been relatively consistent over the past six years (Link 1).

Larger corporations have the time and resources to devote to IT security that small businesses and startups just don’t have. Startup businesses in particular have enough concerns related to gaining market share and generally keeping their doors open and generally can’t devote enough resources to IT security. Further, despite the statistics, many small business owners falsely believe they are boring targets for cyberattackers due to their size. However, small businesses can be extremely lucrative and easy targets for these types of attacks. Most often, cyberattackers are after customer credit card numbers, contact information, intellectual property, or money from company bank accounts that are specific to the individual target company (Link 2). However, many hackers target small firms with a much bigger prize in mind. Increasingly frustrated with the beefed up security at larger firms, cyberattackers are using smaller firms as an entry point as they are often customers or suppliers of larger firms. Once a smaller firm is infected, it can spread viruses and other malicious software to a larger firm by way of emails and other exchanges throughout the course of normal business operations. Another way attackers are attempting to use smaller companies as bait is through the strategy of infecting startup companies in growth industries like tech and healthcare. The attackers then lie and wait hoping these infected companies will be gobbled up through mergers and acquisitions, which have been increasing as of late with the improving economy and availability of cheap debt. The attackers are essentially using the acquired company as a sort of trojan horse strategy to then infect the acquiring company and steal its valuable information.

Whatever specific tactic is used, startup companies have been increasingly targeted by cyberattacks as of late. In terms of time and resources, these new companies are stretched thin enough as it is. In-house IT departments are very expensive as is externally sourced internet security software sufficient enough to fortify these companies against sophisticated attacks. In light of this, what is a small business owner to do? Can they take steps to not be infected without professional help? Or is IT security spending now just an operational cost of doing business that can’t be avoided?

I have worked on projects with long timelines, and they’ve concluded with the rollout of the main deliverable, which is usually a system or a process.  My expertise is in Supply Chain Management, but most of my projects have an emphasis on IT.  I was interested when I found the article The Rollout Phase of the IT Project (http://www.itpmpro.com/2007/07/rollout-phase-of-it-project.html) by Iman Budi Setiawan.

The author focused on 4 main steps of successfully rolling out an IT project:

2. Conduct Key Activities (includes the actual IT conversion to the new system)

These steps align with my experience, and there are two main points worth discussing.  First, the rollout of the system occurs at the end of the process, but the planning for the rollout should be running concurrently with the rest of the project.  Secondly, I think Create the Outputs is the most critical step in ensuring a successful project.

If a project team thinks they can get to the end of the project and accomplish these four steps in a short amount of time, they are setting themselves up for failure.  It is important to train end-users near the rollout date to make sure end-users experience a near-complete version of the system, but work must be done several weeks in advance to prepare training documents, arrange travel plans, and orchestrate the training.  More importantly, Identify the Inputs requires the identification of hardware needed for the conversion, which, in many cases, is identified during the initial selection of the project to understand investments needed to implement the solution.

Most projects have a time constraint, and the final step in these projects is a variation of a go-live or rollout step.  An important point, in my opinion, is that the rollout of the system itself or the flip of the switch to turn the system on should not be in and of itself considered a successful completion of the project even if all training has been conducted and you have full end-user buy-in.  While working on a project, the project team does its best to identify any potential needs and mitigate risks, but it is inevitable that some improvements and adjustments will need to be made after the rollout once many more people are working with the new system.  This is addressed by the Create the Outputs step.  Because these changes are difficult to identify, it is also difficult to understand the amount of time and resources that may be required to address them.  If the project team or IT resources are reallocated too quickly after the conversion, the key change requests that come out of the issues will not be addressed in timely manner, which could lead to the system being ineffective and a failure.

Does anyone disagree with opinion on these steps after reading the article?  Can anyone relate how this is like or unlike implementations not involving IT?