Capacity problems at airports have always been an issue. London’s Heathrow Airport is third busiest airports in the world and the busiest one in the United Kingdom. The capacity issue there has been forecasted to be even worse by 2030 if they do not do something about it now. As the article states “Even by the latest forecasts, London’s five airports will have to turn away about 13m passengers a year by 2030, rising to 46m in 2040 and 92m in 2050” (1). This includes not only Heathrow, but the four other airports in London. Heathrow has had to turn down many passengers and has had many delays due to the capacity issue. If it isn’t addressed soon, it can cause a shut down and lead to even more delays and cancelations. Even though their are 3 other airports in London, Heathrow gets the most traffic because of its location in Central London and it’s International accessibility.

Different solutions to the capacity issue have been in the works. In 2010 the government approved an construction of a 3rd runway, but it isn’t enough. “Even if a third runway increased Heathrow’s capacity by around 50%, growing demand would significantly have outrun the increase in supply of landing slots.” Another government official suggested for London to build a new large airport east of the capital. This would be a better solution because it will solve the capacity issue on a much larger scale than the 3rd runway would and it will also be far away from the central of the capital. This would cause less noise pollution to the residents. The only downfall is the price, the city would need 45 billion dollars to cover this. But this idea would only be successful if Heathrow shut down. You cannot have two major international airports in the same city because they will each take each others customers and won’t be as successful on their own. This will have a major effect on the economy of the UK.

According to this article, the best solution would be to expand Heathrow to the west and building 4 more runways. The article says, “simply moving the runways a couple of kilometres to the left offers the scope for almost doubling Heathrow’s capacity while significantly reducing the numbers of those subjected to oppressive din” (1). The capacity solution would be solved and it would keep Heathrow as the top airport in the UK and only increase its business and profit margin. Their plan is to finalize the proposals and to present them soon while shutting out any other proposals of building new airports and such. They hope the westward expansion goes as drafted.

We discussed capacity issues in class and how it relates to us in our everyday lives. We all travel through airports and we have all experiences delays due to issues like these. I think that for this particular situation, Heathrow should expand to the west and stay away from building any more new airports in the UK. 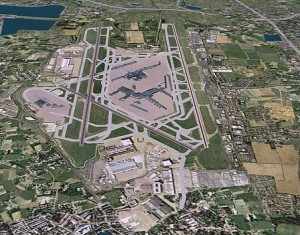 Is the westward expansion the best solution for the capacity issues?

Would you suggest building a new airport?