When discussing quality and the various factors and dimensions that contribute to quality, we cannot overlook Dimension 9: Perception.  No matter how many of the dimensions of quality that a product or service may have, public/customer perception is inevitable and should be nurtured. It seems that the CEO of Abercrombie and Fitch, Mike Jefferies, may have forgotten this. In the year 2006, Mike Jefferies made very controversial (and exclusionary) comments about the brand’s target consumers. As stated by Jefferies…”In every school there are the cool and popular kids, and then there are the not-so-cool kids, “Candidly, we go after the cool kids. We go after the attractive all-American kid with a great attitude and a lot of friends. A lot of people don’t belong [in our clothes], and they can’t belong. Are we exclusionary? Absolutely.” The statement not only gives the perception that kids who do not wear or cannot fit the clothing are somewhat unworthy and not allowed to be in the “in crowd” but it is also hurtful.

Since the comments made by CEO, Mike Jefferies, surfaced, Abercrombie & Fitch has had to do some major damage control but for those customers who do not fit the mode of Abercrombie & Fitch or those who are simply against this exclusionary attitude, the damage is irreparable. The perception of quality for the brand Abercrombie will no doubt suffer. I have never been a consumer of Abercrombie & Fitch for personal fashion preferences but at this point, even considering this brand or recommending it to others will be a nonoccurrence. Look at that! … someone who did not necessarily have any hard feelings toward a brand now will not even consider recommending simply based of perception.  A negative attitude toward a brand can form very quickly and this happens all of the time because a company does not take the time to consider how it actions will look in the eyes of consumers. I have no doubt that Abercrombie & Fitch sells clothes that comply with other Dimension of Quality- Reliability, Durability, Aesthetics, etc.…but if the brand is perceived as hurtful and exclusionary to anyone who does not fit the mode, purchasing or any recommendation for others to purchase will not even be considered.

As stated before,  Abercrombie & Fitch has had to do some major damage control after the unapologetic comments that CEO, Mike Jefferies has made on behalf of the company; issuing a sincere apology to those who may have offended. The image of Abercrombie & Fitch itself should also be considered for revision. The images that the company releases for the purpose of advertising all portray a specific group of individuals, not leaving any room for interpretation. If Abercrombie changed that very influential aspect of the brand…things could change for the better, almost immediately.

What do you think about the comments made by CEO, Mike Jefferies?
Has something of this nature ever stopped you from supporting a company? 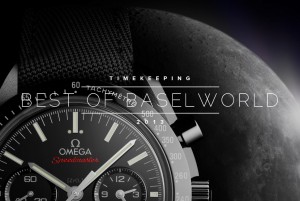 BaselWorld is a prestigious watch show, where the world’s top watchmakers and designers present their newest models. Most of these watches, naturally, cost more than my DePaul tuition. This brings a question to my mind; does a higher price guarantee better quality? It depends how you view quality.

Most of these watches displayed in the video are designed by huge names such as Hermes, Hamilton, Bentley, and Omega. The dimension of quality that is most appropriate for these brands is the Transcendent definition. This definition means excellence. In class we discussed this in detail, stating that many people assume a certain product is of better quality just because of the name that is associated with it.

The man in this video says that the American watch brand, Hamilton, got their big break when Elvis Presley wore it. From then on they became a popular watch, which let them charge hefty prices. A standard Hamilton watch is over $1400! Now, the watch presented in the video, from the Jazzmaster collection, is special for one reason: it has a two-in-one feature, two watches that you can flip over in one overall watch. The point of this is to let the wearer match the watch to his or her mood. Does this make it a better quality watch? Not necessarily, but they are taking into consideration what some of their customers might want.

The next watch the video talked about was one made by Hermes. This was very brief because Hermes is mostly known for their scarves and handbags, but not their watches. There is nothing that distinguishes them from other cheaper watches, such as Fossil or Michael Kors, buts its name. It had a sleek finish so that it would not weigh down on the wearer’s wrist. Omega is another brand that was named which had a watch that was made of “senda” which is just another name for rose gold. The Swatch group, a company known for their quality watches, but with a more affordable price tag, developed this term.

The only watch that was really worth its expensive price tag was the Type 22. The prices weren’t listed, but this watch had chrome finishes, real Italian leather, and a special feature. In each watch there is a pendulum that swings about 28,000 times a minute, which makes its time 72 times more accurate.

I think many watches especially Hamilton, Omega and Rolex are able to have such steep price tags because their reputation, primarily, performance, service and performance, which are all important dimensions of product quality.