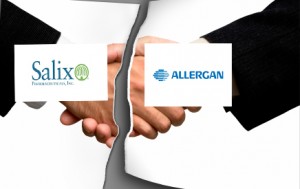 Many of us have not reached the the point in our lives where we are trying to reverse the effects of father time and because of this we may not know what much about the company Allergan. Allergan is the company that makes Botox, a prescription drug that is injected into the skin to help alleviate wrinkles. But this is not all they do, Allergan is a  $53 billion pharmaceutical company with an inventory of products ranging from headache to glaucoma medication.

Recently Allergan was in talks to acquire Salix Pharmaceutical Ltds, a company that specializes in a bowel medication, but during the due diligence Allergan spotted something that threw the deal off. This key detail that ended the acquisition of the $9 billion company was inventory. Salix management seemed to have misjudged how much inventory they had and had overstated the amount sold. This meant that Salix has a large amount of inventory on hand, which we know is one of the most expensive asset of a company, that they could not sell to make revenue.  Another problem with this is that these products were finished goods meaning that they were not raw materials or even work in progress products so this prohibited them from re-purposing the drug.

The effects of inventory is profound. The effects of a misjudged inventory estimate is devastating. In this case not only has Salix lost the chance to pay back stakeholders by being bought out by a large corporation such as Allergan, Allergan may have lost it’s chance to protect themselves from a takeover. Allergan is in the midst of being taken over by an even bigger pharmaceutical company, Valient Pharmaceuticals International Inc. The acquisition of Salix was suppose to make them too expensive to be taken over, but because of this inventory mistake they are ripe for the taking.

As shown above inventory is a major factor in a company, whether they want to be bought out or are just running their daily operations. The management of inventory is crucial to a companies daily operations in that the company needs to have enough inventory for the demand but not too much that a company does not seem liquid enough. The company also needs to balance the right amount so that their financial standings are not in question. Not only do managers need to understand how inventory needs to be ordered they need to what type of inventory needs to be ordered.  Balancing inventory is something that will take a lot of experience and knowledge to achieve , hopefully we all reach a point in our careers where we are at this level.

Do you think Allergan should not have put so much weight on the inventory of Salix ?

Are you surprised that Allergan did not go through with the acquisition of Salix if it meant they would not be taken over?

Understanding organizational culture is a critical component to the success of a project.  I was able to see this first-hand during a large acquisition project I worked on recently.  We acquired one of our competitors who employed over 4,500 employees.   The goal of the project was to successfully integrate our two companies together and eventually operate both businesses in a uniform way.  Both companies delivered a similar service, but the organizational structures and company cultures were very different.  We knew this would pose a challenge to the project as we set out to combine the two together.

During our last class, we discussed the key dimensions that define an organization’s culture.  These dimensions indicate risk tolerance, team focus or communication style amongst other attributes.  During the acquisition integration project we utilized similar key dimensions to try and understand what made our cultures so different.  By understanding the culture differences we believed we could better manage the large-scale changes.  The process involved employees from both companies completing a culture survey and assessing their own organizational culture based on the key dimensions.  We then asked the same group to complete the survey again and indicate what their perceptions are of the other company culture.  The results of the effort are shown below: 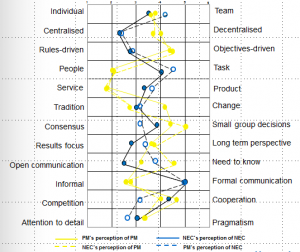 The solid yellow line is the acquired company (PM) assessment of their culture.  The dotted yellow is the purchasing company (NEC) perception of PM’s culture.  The blue lines are the same assessment for NEC.  We discovered the employees from both companies had a very good idea about the culture of the other company, and we could easily identify where our cultures differed from one another.  This information became central to the project and assisted us in managing the integration.  We were careful not to make drastic changes in areas where our cultures differed, and move quickly to integrate in areas where our companies were aligned.  An additional benefit was the positive view the employees from the acquired company had about NEC.  The interest we showed in learning about their culture and applying what we learned built trust between the two groups.  This trust became the platform to support all future integration efforts.  Ultimately, by paying attention to organizational culture we were able to complete the integration project on-time and integration synergies were achieved earlier than planned.

The concept of organizational culture and the effect it has on project management is supported by a recent article I read from on the Projectmanagement.com website.  Click here to link to the article.  The article indicates the most valuable training a project manager can have is organizational culture training.   The author recommends culture based training for project managers and project participants.  The training material should enable project teams to identify, assess and address issues related to organization’s work culture.  The efforts will be most successful when lessons learned from previous projects at a company can be shared and leveraged to ensure future projects are equally successful.

Have you ever worked with an organizational culture survey as part of a project?  Did you find it helpful?

GrubHub and Seamless have now merged into one company. Last year alone they collectively earned over $870 Million dollars in profit. GrubHub has Chicago origins while Seamless started in New York.  Mike Evans the co-founder of GrubHub and the newly combined companies COO said, “I’m excited about the expanded restaurant network that our diners will be able to use.”

The merge initially has many benefits, but over time there are very important executive decisions to make in order to optimize all dimensions of a quality service. One benefit is that combined they will operate in over 500 cities in the United States. They also decided to keep all 650 full-time employees. The former CEO of GrubHub Matt Maloney will remain CEO while the former CEO of Seamless Jonathan Zabusky will be president.  Both former companies have merged with much smaller organizations in the past. For example in 2011 GrubHub bought Dotmenu which gave them an extra 250,000 menu listings at different restaurants around the nation.

The company still has many decisions to make. One decision the company has yet to make is the name of the new brand. Perception is reality, and they should take very careful consideration of how to name the new brand. They have been heavy competitors in cities like Chicago for many years, and they have both built their own brands into what they are today. GrubHub did have more profit, and therefore it would be advantageous to keep that name over Seamless. Changing the name entirely is also an option. Since there whole process is derived from online use it is unlikely they will create a new name. For example if a family uses GrubHub or Seamless on a nightly basis, they will likely have the URL memorized or saved in their favorites. This means the new company needs to be very transparent and loud with their changes in order to retain the brand loyal consumers from both companies.  I have one recommendation if they decide to change the name of the company, and that is to buy a new website with the company name. Then link both former websites to the new website which on the surface seems like it would satisfice all the consumers. From there the new company needs to internally improve their servicing process.

After the merged company has chosen a conforming brand they should also merge the processes to optimize reliability. They can assume they will have a large impact in the market for online food ordering because separately they held large portions of the market share. It is likely that both former organizations had their own unique processes, but one standardized process would be most financially beneficial.

Last year, Hewlett-Packard bought Autonomy, a software company focused on data analysis and intelligent searching, for $11.1BN, or 12.6 times their 2010 revenue. Last week, HP announced an $8.8BN write-off related to the acquisition, effectively admitting that they overpaid for Autonomy by 79% (HP had a lost of $6.9BN this quarter, in large part due to this write-down). HP is now claiming that fraud was potentially committed by Autonomy during the acquisition process. However, HP was not the first company to look at Autonomy, and potential fraud aside, the deal was overpriced according to the earlier “courters” of Autonomy (like Oracle).

So, how did it happen? There is quite a bit of “he said, she said” going on in the public eye, and likely more of it privately.

In both of these acquisitions, the acquiring company was a “has been” in the industry looking for a way to transform. HP bought Autonomy to transform their software division for the 21st century. If we speculate a bit, it is not hard to draw the conclusion that instead of trying to transform what HP currently had, they chose to buy a transformation, and thus overpaid for it – either out of optimisim for the deal, desparation for a solution, or both.

If we read a bit into the “he said, she said” that is public, it appears as though a couple of things are going on:

(1) HP overpaid for Autonomy, regardless of potential fraud (based on earlier companies that passed on Autonomy, and former Autonomy executives admitting publicly that HP “paid a full price”);

(2) No one besides HP’s board or CEO thought the acquisition was a good idea for HP;

(3) There were power struggles within HP that caused speculation and indecision on whether they would be a hardware company, software company, or both; and

(4) The cultures of the two companies were not taken into consideration.

This last point is potentially the most important from a longer-term strategy perspective. HP, a larger, mature company that has not kept up with industry changes, was likely “stuck in its ways” in terms of how the company operated – from R&D all of the way through sales and support. Autonomy, a smaller, “trendier” company was likely more nimble and able to respond to market demands, which was one of the reasons they were more relevant in the market. Based on some of the public comments, it seems as though Autonomy was bought, and then forced to change it’s ways to the “HP way”, instead of integrating the two sets of cultures and processes to get the best of both worlds. If you take a successful company and force it into the processes for a struggling company, it will not reach the revenue potential that was the basis for the price paid – hence the current situation.

It will be interesting in the coming months to watch the fallout of this situation. There will most certainly be litigation that comes out of this as a result of the write-down and potentially the accusations of fraud. There is already speculation that HP could become a takeover target. And, most importantly, this is likely a “make or break” situation for HP – they could either become yesterday’s news, or if the embrace the need for change, transform the company.