An important part of the project management process is to also manage any risks associated with that particular project.  In doing so, the project has a much better chance to be successful if anything does happen.  The four main steps in risk management are:

In following these steps carefully, it allows any project manager or team to identify all potential risks, how they might affect the project, and then how to respond to them and to maintain this response level throughout the project.  Recently there was an article published in Forbes about risk management as it pertains to financial risk which explained the difference between mitigating risk and having complete uncertainty about an event.  Although the article is focused on financial situations, it seems it could potentially apply to project management as well.

The article goes on to say that there is a difference between risk and uncertainty.  Risk is used to define cases of known probability.  For example, McDonald’s most likely understands the probability a person will slip and fall in one of their locations for every million visits to a store.  This would be risk; a known probability which is something they can mitigate.  Uncertainty on the other hand is when the probability of an event is not known at all.  In some cases, companies will treat uncertainty by saying there is an X% chance of an event happening, essentially guessing about the level of that chance.  Complete uncertainty however is when “you don’t know what you don’t know.”  It’s the situation when a company hasn’t even thought of an event in the first place, and so cannot manage it in any way.  These uncertainties are called Black Swans.  The article concludes by explaining that companies ought to have contingency plans that will help to offset any Black Swans.  Again, they are not predictable, but can be minimized by generally planning to have “a Plan B” for this type of situation.

Even though the article’s ideas are all based on economics and finance in the business world, is does seem possible that the same approach can (and maybe should be) used for project management as well.  Matrices are typically created for a project to manage risk, measure how much of an effect those risks will have, and how to deploy a contingency if they happen.  In using the theory explained in the article, these matrices are really only taking into considering the known probabilities of those events happening.  It doesn’t account for the potential of Black Swans, which could wreak more havoc on a project if they occur.

Do you think there should be contingency plans built into projects for the unknown?  Is there a way to include some general safeguards outside of a FMEA plan to really minimize risk AND uncertainy?

Forbes: Uncertainty and Risk Management: What to Do About Black Swans?

With the explosion of social media, the United States (along with the rest of the world) has become engrossed with the processing of data.  Many companies with an online presence are beginning to use data to their advantage in order to better market to their customers.  More and more people have become increasingly more comfortable providing personal information to online companies in order to participate in rewards programs, social networks, online communities, etc.  Along with this huge increase in “big data” as it is called now, there comes great responsibility as it relates to privacy.  Companies are required to adhere to privacy policies and make sure any customer using their services are clear on that policy.  In general, this information absolutely cannot be used in any other way than for direct use by that company to provide the best service to that customer.  Just recently, the use of this information has taken an interesting turn, especially in regards to personal privacy.

Just recently, information leaked to the press regarding a government program called PRISM, which apparently is a program that was set up to monitor and collect information from large tech companies such as Google, Facebook, Twitter, Skype, etc.  According to news outlets, many consumers were not exactly concerned with the information.  Many felt that they were already being monitored in some way, shape, or form so this particular news wasn’t exactly life-altering.  Nevertheless, many news reports explained that the big tech companies initially refused to provide access to their cloud-based servers for this PRISM program in an effort to stand behind their privacy policies.  After all, none of this information should be allowed to be given to the government unless there is probably cause for concern at that particular company, i.e. terrorist activity.

As the information leaked out to more sources, additional concerns began to circulate as well.  These were more focused on the businesses themselves.  If these tech giants are so easy to roll over when pushed a bit by the government, what says they all won’t do it again in the future (or had already done it in the past)?  Of course, this same information also began to leak to other countries who are all trying to establish their own privacy laws.  If the US is allowed to collect this information legally, they can technically share this with other governments who are NOT allowed to collect this information directly from their citizens.

With such a vast amount of personal information available over the Web, companies are going to have to continue to establish very specific policies as it relates to customer privacy.  Many companies have begun to establish entire departments dedicated to privacy and/or information security, but it appears there needs to be even more focus.

Were the policies not clearly defined?  Who is responsible for mediating whether or not a company should be required to provide information to the government?

Last summer, Samsung Electronics agreed to customize a version of their popular Galaxy S II smartphone for a health care start-up company that needed a device that would transmit heart monitor information directly to doctors. Since then, it seems that Samsung has officially decided to “play” in the enterprise solutions market. In fact, a Samsung spokesperson noted that Samsung has “made the decision to be No. 1 in enterprise.”

It seems to be a fairly bold statement, seeing as Apple and RIMM have dominated the enterprise market in the recent years. In fact, Apple was said to have recently passed RIMM (Blackberry) as the leading provider of company-issued smartphones and could maintain that position through 2016. (BusinessWeek). The overwhelming majority of large companies are testing iPhones and iPads for employee use. 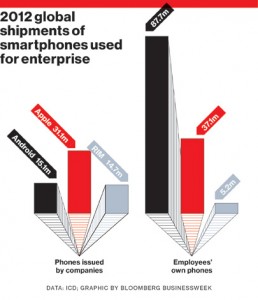 On the surface it would appear that the barrier to entry in this market is very difficult, if not almost futile. How could Samsung possibly think there’s an opportunity here?  The answer is customization. Apple has a history of cutting edge products, but ultimately doesn’t customize ANY of them. What you see is what you get, and for most, this is quality product that needs no customization. However, Samsung sees an open door. So many companies are now looking for enterprise solutions that will best fit their structure, and Samsung feels it can meet these demands better than Apple or RIMM. By being open to customization as well as working with third party vendors to target specific industry’s needs, Samsung plans to fight to become #1 in enterprise solutions. The company is taking a good hard look at competitors like HTC and even Google, and notice that neither seems to be interested in the enterprise space. The business strategy seems to be to attack a market segment that has not yet been saturated.

Of course, to play in this segment, Samsung must be prepared for the new challenges it will bring. For example, an advantage of Android is that it’s highly customizable. However, it can be a disadvantage for the same reason, making it difficult to standardize security and management software to sell across multiple corporations due to so many different versions of Android currently available. To address this challenge, Samsung has already invested in designing its own software for this purpose which will make all Samsung devices operate consistently.

Samsung will have other challenges to consider as well. For example, the company will need to be sure to market to corporations accordingly to re-brand itself as an enterprise solution provider. Also, it will need to continue to offer a sustainable competitive advantage over time. Finally, resources will need to be reallocated or added to support corporations’ customer service requirements as well as to meet their customization needs.

How do you think Samsung will perform in the enterprise market? What would you say your biggest concern would be if you were the CEO of Samsung?

The McGraw-Hill Companies recently announced its decision to sell its education business to Apollo Global Management, a private equity firm that has a history of  investing in educational businesses, for a price of $2.5 billion. The remaining publicly traded company would then change its name to McGraw-Hill Financial and focus strictly on its financial and ratings services. The plans for the sale was first announced in September 2011 which has already resulted in in the company seeing an increase in overall shares by approximately 34%, a significantly higher value than was predicted by the S&P 500 index. How and why would a company like McGraw-Hill which has traditionally shown growth every year, has maintained a solid stock price, and pays dividends regularly, decide to just sell off its education business?

In reviewing articles written by several of the major finance publications, the sale is described to only help the company (or should I say companies) in the long run.  As with any company, the business strategy should be reviewed on a regular basis, making sure that the short term and long term goals can still be met. In the case of McGraw-Hill, the board of directors has been monitoring the education industry as well as the finance industry and has recently seen that state budget cuts across the country have resulted in a decline in sales for seven of the last eight quarters. However, the board also knows that the education business is in a transition period
from a print focus to digital focus and has been trying to ensure it has the capital to successfully make this transition to be profitable. Another very important part of the decision was based on shareholder feedback. Many were complaining that the returns were being impeded by the fact that McGraw-Hill was two completely unrelated businesses. As a result, the decision was made to split the two businesses into two, selling the education business to a private equity firm. In doing so, the financial business increases shareholder value and balance sheet flexibility, and the education business becomes more agile in its quest to become a completely digital educational services business. In other words, the education business gains speed, which means products and services can make it to market much more quickly in order to drive growth and market share.

Based on basic business strategy theory, the most successful businesses always keep their shareholders, customers, and employees happy. The decision seems to have addressed the shareholders, but what about the customers and employees?  How would you evaluate McGraw-Hill’s decision to split their businesses?   Should there be any concern for the education business now that it’s owned by a private equity firm?

McGraw-Hill to Sell Education Business to Apollo for $2.5 Billion