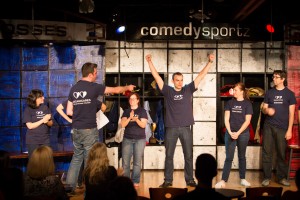 Our team raised funds for Chicago Cares, an organization that builds volunteer experiences to develop and engage the community.

Chicago Laughs was an improv comedy event that was held at Comedy Sportz on August 5th 2014, to raise money for Chicago Cares and create awareness of their cause. Tickets were available for purchase at www.comedysportzchicago.com/chicagocares. Our main audience was comprised of event volunteers, coworkers, Chicago Cares supporters, family, and friends. Additional money was raised through online donations, corporate donations, and silent auction. 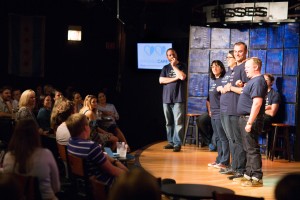 The event was fully catered with a steak and chicken taco bar.  The main entertainment was a two-hour live comedy act presented by experienced improv comedians in addition to two hilarious members of our team.

The event was put on with a budget of under $100. The facility, catering, talent, and venue were all donated in support of Chicago Cares. 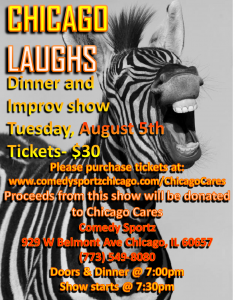 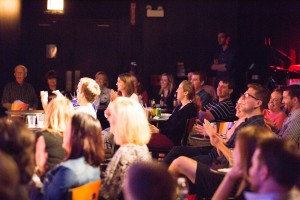 When we were creating our project plan our goals were to raise $7500 and have the event attended by over 100 people. By the time we reached the implementation stage of the project, we had focused in on the results we could realistically reach within the time restraints and available resources.

Our methodologies were to focus on one on one contact to encourage ticket sales. We did mass marketing on Facebook, Twitter, and mass email but we found it was more effective to reach out to people individually.  To stay organized, we assigned tasks and areas of responsibility to each team member. We had clear set deliverables and had weekly group meetings to make sure milestones were being meet.

The final amount donated to Chicago Cares was $5530 and with an attendance of 100, including all volunteers. 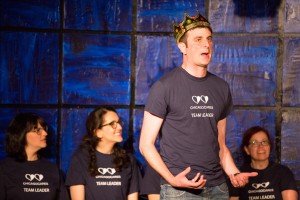 1)      Be sure to make realistic goals, especially with money goals and event attendance expectations.  There is nothing worse than having high expectations and not being able to deliver.  Create realistic and attainable goals for your team.  Make sure the scope and deliverables of the project are well detailed and followed throughout the project.  Try to stay on course and don’t get distracted or over burden yourself by trying to do too much.

2)      Success begins with planning.  A well thought out and detailed project plan will prove to be extremely vital.  Be sure to cover all your project management basics.  This will create a seamless event that will allow your team to flawlessly execute.

3)      Personalized promotion.  It was really neat to think about all the tools and technologies at our disposal as far as promotion was concerned.  Having the ability to easily use social media like Facebook, LinkedIn, Twitter, etc. seemed like a good prospect.  Sending out constant email blasts felt like it would be extremely effective.  As it turned out, approaching people individually with a more personalized promotion approach deemed to be much more effective.

4)      Remember the cause and enjoy!  Don’t get caught up in just trying to raise the most money possible or use the project as a competition.  This project is about so much more.  Don’t forget to fine tune and practice your newly acquired managerial strategies and skills.  Enjoy the fruits of your labor at your event.  Sit back and take notice of all awareness, good people, and success that you and your team have brought together. 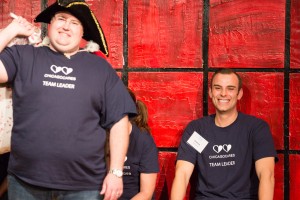 It really shows, that if you hire good, trustworthy people, they are going to bring nothing but positives to your event.  I believe the case in point was watching the caterer, Tim Dudik, set up the food and seamlessly service close to 100 people without any problems.  Another quick and easy lesson learned is to be flexible.  Remember to get the job done at any cost and that no job is beneath or above you.  Accept and be open to people’s suggestions and be open to creativity.

As the event ended for our group it was difficult for team members to think of any issues or problems that occurred.  Tom, John and I consistently had surprised looks on our faces throughout the event.  Things seemed to be going so well, that it become apparent there was not much else for us to do to help.  That I believe is a testament to the vigorous and detailed planning that was performed for the project.  With that, having well defined roles and responsibilities was crucial, which really created a well oil machine during the event.  Finally, I believe the group really underestimated one of the biggest advantages that we had, which was a practiced veteran within the improv comedy field.  Josh’s expertise, background, and history provided us the blueprint to an extremely successful event.  I believe all of these lessons learned really allowed our group to create and execute a terrific event that really went without a hitch. 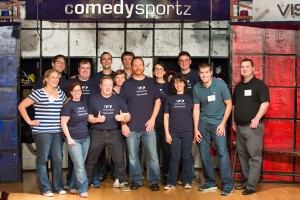 I typically manage field projects which consist of having personnel working outside in the elements, along pipelines across the country.  When you introduce outdoor elements to a project, things become a little more dicey than managing employees within an office space.  Very recently, I was managing a lengthy field project where nothing seemed to go right.  It didn’t matter how hard I fought or what decision I made, the hits just kept on coming.  The battles consisted of bad weather, flooding, equipment failures, experienced personnel leaving the company, data errors, vehicle accidents, personnel errors, etc.  It felt like I was stuck in quicksand, I just kept on fighting and fighting, but was seeing no positive gains or progress.  Motivation deteriorated, schedules were reduced to garbage, the client started questioning our work, and so forth.  As the project has ended, I am looking back to see if I could figure out how I could have been more successful in what seemed like a doomed project.

I decided that project planning, proper project kick-off/training, and improving our risk management plan would have undoubtedly helped.  I feel like project planning can always be improved, especially when you find the project not going so well.  With a rushed project, I should have took more time to set out a more detailed project plan and properly communicated this project plan to the field crew.  Before the project started, I should have conducted a longer and more detailed project kick-off meeting with my team to help prepare them more for what was to come.  The risk management plan should have been expanded to include more.  Also, a constant communication stream should have occurred with the field crew, reassuring and providing motivation to keep them focused on a goal that may seem impossible to them.

But sometimes, no matter how hard you plan or mitigate risk, things go wrong.  Its how you deal with it, communicate with your employees during it, learn from it, and strive to improve the next time.  You always have to stay positive with yourself and your employees.  That is what will make you a better manager.  Having endured such an experience and learning from it, makes me feel like an improved and better manager.

Who here has experienced “quicksand” in project management?  What did you learn from your experience and what would you do differently?

Being a part of a consulting company that is growing at a rapid pace, it is easy to be critical of all the growing pains that accompanies growth.  Ingrained in our corporate culture is the idea that the most important task for our employees is to be billable.  I don’t believe the company does this on purpose, but every conversation always seems to come to the bottom line.  As the department I am a part of has grown from a cozy 25 employees to almost 100 employees, the department togetherness has been lost.  The department no longer seems like a cohesive business unit with managers working together for the better of the department.  Right now, as it stands, managers are only out to improve their own situation by being sure the employees they are directly responsible are billable at any cost.  This creates a constant battle of resources and a constant lack of communication.  It is crazy to me that the mangers within the department don’t work together, don’t communicate, don’t share resources and knowledge, and in all, just don’t care about eachother.  The department has become so disjointed that its really starting to hurt what should be the bottom line, a quality deliverable and a happy client.

To me, this issue resides within the managers themselves, but most of all falls on the shoulders of our department Vice President.  As the corporate culture of being billable at any cost will most likely not change, the VP needs to gather his managers and figure out a way to bring back the department to its cohesive unit operating together in unison.  Maybe to do this, the VP should stop looking at managers individually and start looking at them as a group.  Force them to work together by combining the business units billable numbers.  Another solution to bring together the department could be an ERP system or Enterprise Wide Management.  An ERP is actually in the works for our company, but I do believe that this will get all the managers using the same tools, performing the same tasks, and in turn coercing them to work together.

What do you guys think?  How can our department be sure that managers get their billable numbers, but still work together in the process?  Is it possible to change a corporate culture away from a billable nature for a consulting firm?