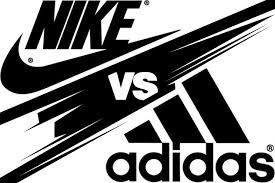 Adidas and Nike have been in competition since the beginning. Both companies sell similar products, including shoes, clothing, athletic equipment and many more things in the sporting world. As a result they are selling to the same target market, and customers have to make the choice based on what they are purchasing. They both are very popular and have a huge customer base. They are constantly competing every year for sales and are always trying to top each other. They each are so well managed and have such developed business techniques that it might seem hard to improve more than they already are. Nike might be more popular in America but Adidas has a strong grip in Europe, and has rarely shown signs of weakness.

However recently Adidas has been struggling to keep pace with the retail powerhouse that is Nike. Third quarter sales for Adidas did not meet projections, and this set off alarms for management. Adidas golf alone has gone down 29% from this time last year, which is over 180 million dollars. To combat this Adidas has vowed to drastically increase inventory management. The company is on a mission to keep surplus stock down to combat holding costs. Analysts claim that if they can cut surpluses it will turn company earnings back towards projections.

Adidas is especially worried about their golfing line because of how expensive it is and how quickly new products are developed. If anyone has ever shopped for golf clubs you will know how crazy expensive they can be. We are talking about a thousand dollars for a good set of clubs. Customers constantly want the newest and most high tech clubs available. So if they are overstocked on a certain set of golf clubs and a new and improved set is released, it now becomes much harder to sell the surplus and they could be stuck losing value the longer they hold them.

They even decided to “not chase sales” for the second half of 2014 in attempt to focus more exclusively on their inventory management. They are trying to reduce inventory to further increase profit. Better inventory management gives Adidas the flexibility to react quickly to market sentiment, and adjust to the popularity of certain items over others. If they have less quantity of a unpopular product in their inventory then it minimizes potential loss on unsold goods.

Adidas is confident that increased inventory management will grow sales and margins in 2015, especially in their golfing department, returning them to profitable levels.

Do you think Adidas made a  smart decision to step away from emphasis on sales to focus more on inventory management?

Will better inventory management allow them to surpass Nike?

How important do you think inventory management is for companies like Adidas and Nike? 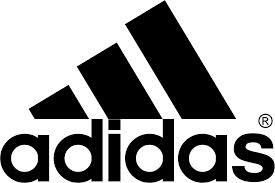 After its release, the iPod forever changed the way we look at mp3 players. Initially hitting the market in 2001, it became the most popular and recognizable portable music device. This can be attributed to it’s success in the introduction phase. The distinctive click wheel and white head phones that gave the iPod its iconic look and popular product design. They spent a lot on advertisement and saw minimal profit. Practically everyone had some kind of iPod growing up, and Apple was constantly renovating and improving it.

In 2001, when it was first introduced, they sold a total of 125,00 units. By 2006, they were up to 88 million iPods sold. This was when iPod really entered the growth stage. The product design began to stabilize and they continued to enhance and upgrade its ability and capacity. This was also when Apple really started to heavily advertise. The white headphones continued to be a stable of the iPod and Apple capitalized on this with advertising. This also allowed them to have customers advertise for them. Anytime you saw someone using white headphones, you knew it was an iPod without even seeing the iPod. The fact that they could have successful advertising without even showing the device was an amazing accomplishment.

Sales peaked in 2008, and at this point they sold over 157 million iPods. This signified the beginning of the maturity stage as sales started to slow down and stabilize. Competitors were established and ultimately realized they had little chance of competing with the iPod. Apple was also able to reduce cost and improve production. By 2010, 275 million iPods were sold. Most customers at this point are repeat buyers and want to upgrade their previous device.

In 2014, almost 13 years and 26 models later, the iPod seems like it has finally reached the end of it’s product life cycle, and is seeing the effects of the decline stage. Profits for the year are down 52% compared to this time last year, and is expected to drop even further.  On top of this Apple has greatly reduced the amount of time and money spent on enhancing and advertising. The newest iPod release was the 5th generation iPod touch, and that was in May of 2013. In 2014 they released colors for the 5th generation, but it has been over a year since the last iPod model was released, and this is the longest gap in the devices history.

Reasons for this are believed to be a result of consumers expecting more from their devices. Instead of buying a iPods, Apple consumers are buying iPhones and iPads instead. 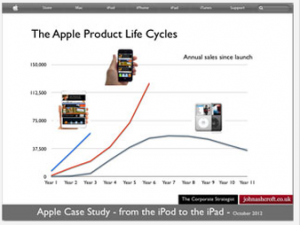 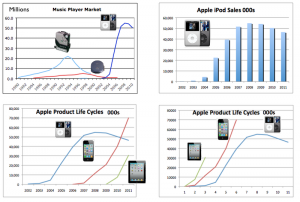 Steve Jobs joked in 2007 when the iPhone was released that the iPhone was “the best iPod we’ve ever made”. I wonder if he realized how correct he was, or that the iPhone would eventually replace the iPod all together. iPhones and iPads offer the same music capabilities of the iPod, but with much more ability, including thousands of mobile apps, accessible internet, and many ways to connect and communicate.

Do you think the iPod will rebound or has it completed its life cycle?

What are some reasons the iPod has seen a decline in sales?

How was Apple able to create such a long and successful product life cycle? It has taken over a decade for the iPod to reach the decline stage.