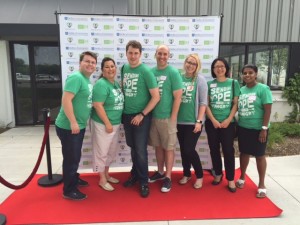 Our team sought to partner with Feed My  Starving Children (FMSC), an organization  that ships packets of life-saving food to  malnourished and impoverished families and  orphans all over the world. The best way for  our team to support their cause was to  provide the three things they always need:  donations, volunteers, and awareness. To  facilitate this, we partnered with Team 3  (who was also supporting FMSC) and  planned a joint fundraising, volunteering, and social awareness campaign.

We looked to deliver on all three fronts by hosting a major multi-faceted event on August 8th, which included a red carpet event with a photographer (to use for our post-event social media push), a fundraising food basket raffle, a two-hour packing event, and a fundraising dinner immediately following (with a contribution equal to 15% of the check). We also conducted an ongoing fundraising drive online with the support of FMSC during the length of the class, and supported both the fundraising and service efforts with a comprehensive social media campaign that included Facebook, Instagram, Twitter, and email/phone calls/face-to-face interactions.

Founded in 1987, FMSC is a national non-profit organization, based in Minnesota with three locations in the Chicago-land area. Their mission statement is to “Feed God’s Starving Children Hungry in Body and Spirit.” and their goal is to provide packed meals to needy children internationally. Since their founding, they have become a well-established organization. They have earned a four-star rating from Charity Navigator for the last ten years, and allocate 92% of their donations to the feeding process.

How we chose FMSC

One of our team members, Mark, works for a company that has a close partnership with FMSC. He took the lead to contact FMSC and spoke with Lisa at FMSC’s development department to begin partnership efforts. We were able to utilize some of their resources to start our social media campaign and were able to utilize a FMSC website portal for collecting donations and for educating our friends and families about FMSC.

Because of our partnership with Team 3, we maintained both team and combined goals. We broke out our goals as followed: 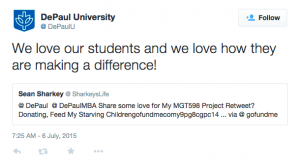 Several group members were able to generate volunteer interest for a day other than August 8th. Given the numbers involved and the relative ease by which volunteerism could be accommodated, three micro-events were held on July 16th, July 27th, and July 30th. These micro-events netted 33 volunteers and 7,128 meals packed. Better still, these micro-events were used to generate further interest in the August 8th event day by serving as a concrete demonstration of the good that can be done by volunteering with FMSC.

After weeks of working tirelessly to pursue our goals, the day of the event eclipsed even our wildest expectations. In addition to the micro-events leading up to the 8th, both teams together registered 157 volunteers for the service event, or an average of 12 volunteers per person. Our team specifically registered 104 people for the event, or an average of just under 15 volunteers per person. While it was impossible for us to get an exact attendance count for our group (a family not associated with our project reserved space for twenty), we had no fewer than 144 volunteers show for the service event. 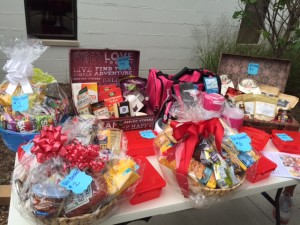 Volunteers arriving early to the service event were  treated to our red carpet photo session (courtesy of  Team 3, and full marks for a job very well done  there). They also had an opportunity to purchase  raffle tickets for our two-chance raffle, which was an  incredibly popular draw. And, of course, each of us  had the opportunity to network and verbally speak to  what we were about to accomplish. 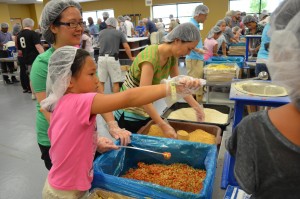 Two exhausting hours later, our volunteers packed an amazing 33,188 meals, which is enough to feed 90 kids for a year. We were also able to collect survey feedback from 53 people, or 37% of total attendees. Following the event, we moved over to Jimmy’s Charhouse, where we expected to have about 64 guests attend. Instead of 64, we had a whopping 94 people show. The raffle was drawn following dinner, a thank-you cake was shared with the group, and Jimmy’s Charhouse cut a check of $250 to FMSC. 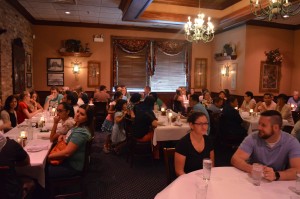 Overall, we surpassed every project objective  we set for ourselves which was a pleasant  surprise. Our group’s collaboration with Team 3  helped diversity our resources to create a better  day-of experience for all of our volunteers. We  raised $3,950 in donations and another $5,324 in volunteer time value as assessed by FMSC.

In addition to the lessons learned above we have the following advice for future project teams: 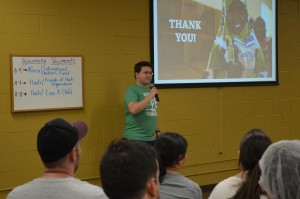 Trek Bicycle Corporation is a major multinational bicycle manufacture based in Waterloo, Wisconsin. Up until recently, different divisions used varying software programs and communication styles to perform its project management. This lead to constant delays in getting new products to market as well as missed sales due to stocking out at key times. When Kris Lamp took on the newly created position of program manager, she initiated a search for a unified project management software suite. There was a clear organizational need for a product that would allow for seamless communication amongst divisions around the globe.

The company chose AtTask (which in early 2015 rebranded as Workfront) as their Enterprise PMIS solution. Under Lamp’s guidance, the implementation was kept simple. They opted for a software-as-a-service (SaaS) model, which transferred the support risks onto the vendor. Also, the company opted for minimal customization to the PMIS and chose to implement the rollout to one group at a time. This slow start allowed for the project team to work out any issues as they came up and before larger scale implementations. This mitigated the risk of project failure by starting simple and allowing time in the schedule for early rework.

Trek and the PMIS project management team heavily relied on management buy-in to help with employee adoption of the new system. Because the PMIS was eventually rolled out company-wide in many different countries, the project management team utilized local managers to encourage and/or mandate employees to adopt the new PMIS. In return, the PMIS project team kept manager notified of changes far in advance and conveyed why and how the changes would happen. The overall consensus from employees was that the PMIS not only helped with daily work, but also helped them feel more connected with the company’s work.

Lamp credits the PMIS’s implementation success to decisions made early on by the project team. Choosing a vendor that had an off-the-shelf product that fit most of their needs and was able to provide support alleviated much of the early risk of failure. By using a slow and careful implementation, group by group, change requests were minimal and easy to handle. Most importantly, the team was sure to provide ample advanced communication to managers about the software. This allowed managers to educate employees on why the change was happening and why it was so important to the company. Overall, the PMIS took Trek’s project management from an ineffective and redundant process that frequently went over schedule and budget, to a transparent and seamless linking of divisions.

Does your company utilize a PM software suite?  If so, which product do they use and what is your opinion of it?

Based on his experience with software projects, Roetzheim suggests companies take an approach similar to that found in the PMBOK when it comes to life cycle cost estimating accuracies. Initial estimations should be within +/- 50% of the actual cost and the budget should continue to be refined as the project’s requirements are more fully understood.

The first step to estimate scope is to determine metric used as a measure of scope. In software there are numerous options, but the most common is the number of source lines of code (SLOC), which is the number lines of code written by humans and is usually given as thousands of SLOC (KSLOC).

To determine the number SLOC, you can use one of two options: the direct estimating approach and the function points (FPs) with backfiring approach. Using the direct estimating approach, you break the project down into modules and use multiple expert opinions to estimate the number SLOC’s per module. This is called a Program Evaluating and Reviewing Technique (PERT) calculation and is done by obtaining optimistic, pessimistic, and most likely values. The most likely value is weighted times 4 and the mean and standard deviation are calculated and used to create an estimate with a high level of accuracy.

The FPs with backfiring approach uses the estimate of the number of logical internal tables and external inputs, outputs, interface files, and queries to estimate the number of ways the program must interact with the users. Then you multiply the raw data by its FP conversation factor to fund the number of FPs.

Then using backfiring you convert the FPs to SLOC using the function point for the applicable language.

The author argues that the calculation above will deliver a reliable person-months estimate feeds into the project’s schedule and budget and that it should continue to be managed as the project moves forward in its lifecycle.

While the author’s presents his methods for estimating scope for a software project, he does make any recommendations on how to utilize them. If your company conducts software projects, does it use SLOC when estimating? Is there a specific process used to calculate time requirements and how does it compare to the process suggested by the author?