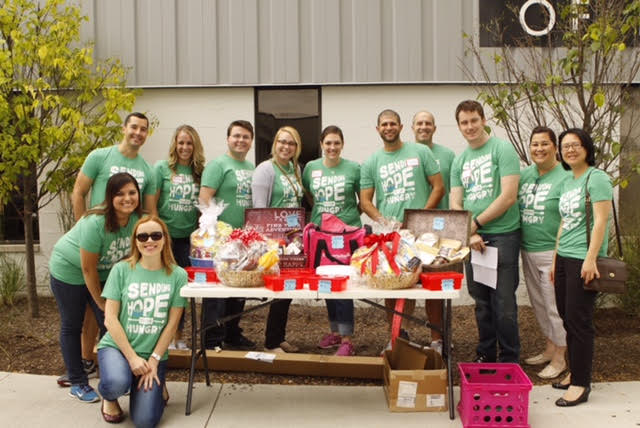 proposal and reaching out to our selected charities. They were very eager to assist with the

planning of the event and had a lot of online resources to help our group get started. After looking

into their organization and mission statement further, we felt it was a charity that everyone could

relate to. Although we do not all have children, it was important to all of us to help an organization

that believed in the world’s future. FMSC is committed to feeding hungry children around the world

where getting a healthy meal on a daily basis is hard to come by. FMSC is a non-for-profit

which then get shipped to the children that most need it around the globe.

resources together and scale up both the fundraising and volunteer event. We named ourselves,

“Keeping Kids Alive”. We also had a pre-event set up outside the FMSC Libertyville location and a

post-event dinner at Jimmy’s Charhouse. The pre-event activities included a red carpet where

volunteers could take pictures with their families and friends. This was a way for volunteers to

showcase their pictures on their social media sites and create additional awareness of our event.

During this time, we were also raffling off tickets to gift baskets that would be raffled at Jimmy’s

Charhouse after the packing event. All the goods in the gift baskets were donated by the employers

of some of our group members. The dinner at Jimmy’s Charhouse provided additional revenue

towards our fundraising goal since they were donating 15% of the proceeds to FMSC. 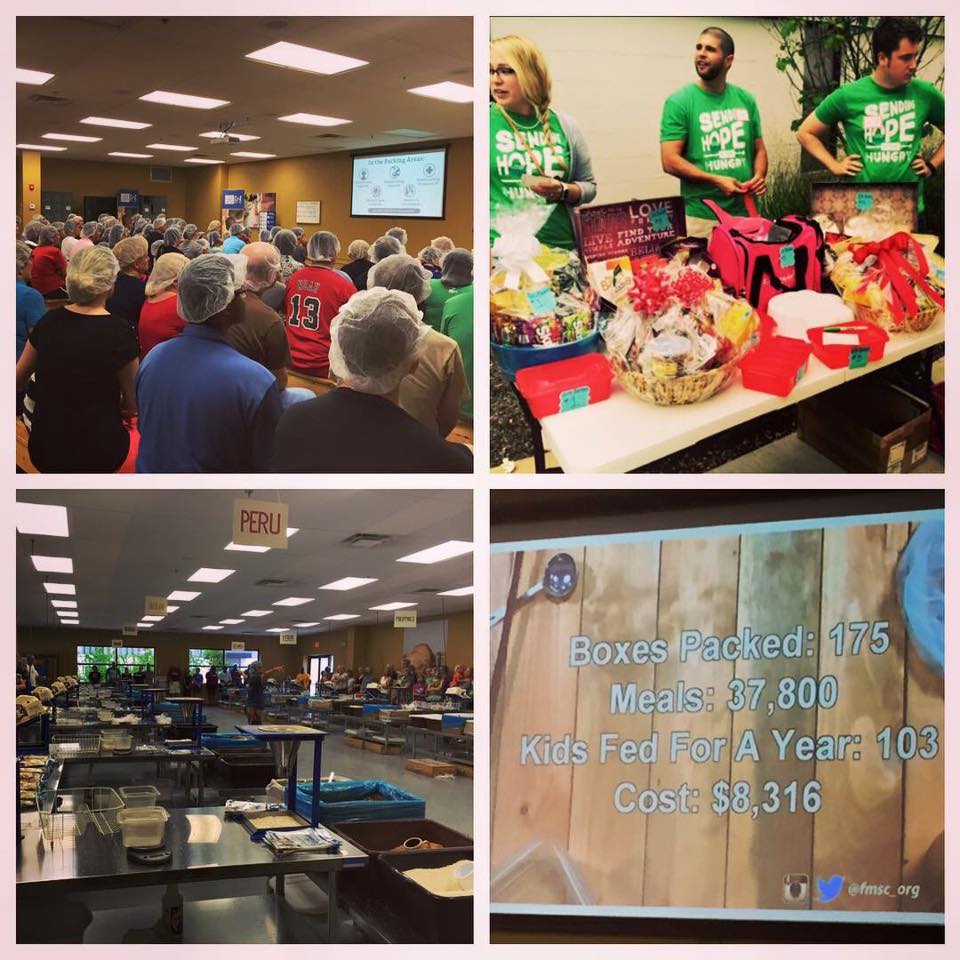 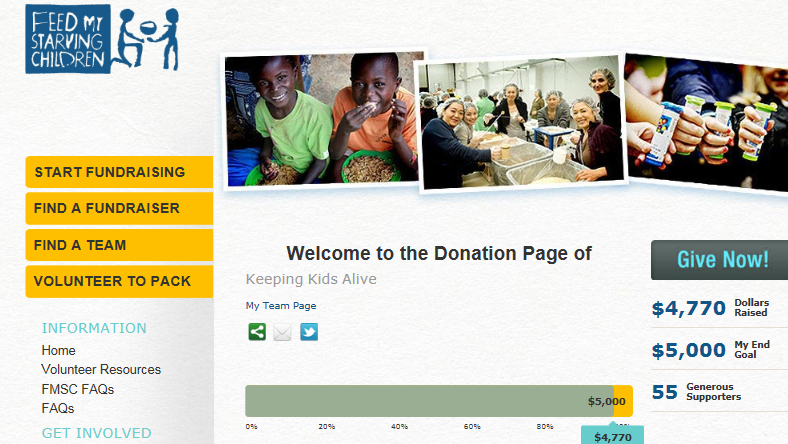 Actual – Our main source of revenue came from the FMSC site donations. The original goal for our team

was to raise at least $1,500. The total amount raised from the FMSC link on our group’s behalf was

$2032.  This amount is 35% more than we anticipated. In addition, we received cash donations outside

the link in the amount of $1025 which we did not anticipate. FMSC T-shirt sales and coin boxes raised

another $108.75. The raffle ticket sales generated additional fundraising revenue of $300.00. Finally, the

proceeds from Jimmy’s Charhouse totaled $96. The grand total of all donations was $3561.75. We

exceeded our fundraising goal by creating different revenue streams such as an online website, through

purchases, a raffle, and hosting a post-event with a percentage donated to our charity.

Number of people participating in the packing event: 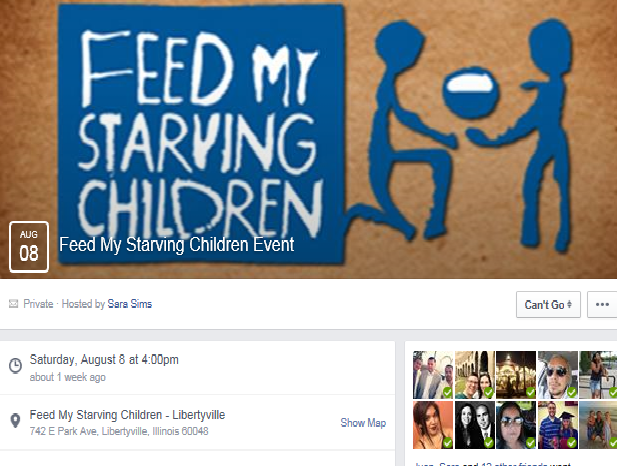 participate) – Total of 60 packing event participants from our group.

Actual – We met our goal of 60 volunteers. We also created awareness for the charity and many of the

volunteers that did not attend have stated they plan to volunteer at FMSC when their schedule allows.

In addition, the collaboration between the two teams generated an in-kind investment in the amount of

children fed for a year). If we split this investment down the middle, our portion would be $4158 worth

Actual – When this goal was set, the post-event was being planned to be held at a larger venue so the

expectation of recruiting 10 attendees per member seemed reasonable. However, after checking

availability and going through the logistics, it was necessary to scale down the post-event. The total

1. One of the biggest reasons why our event was a success was the willingness of the charity to

help. Although they did not have a lot of space on site to support a larger pre/post event, they

were flexible in accommodating many of our other requests. Their online website supported a

way for us to keep track of donations made on behalf of our team. They also had a lot of printed

material, videos, and information on their social media sites that we could use to promote our

fundraising and volunteer efforts. So it is important to work with an organization that

2. Create events based on the talents and connections that your team members have.  The idea for

be willing to donate the goods that went into the baskets. They were easy to put together and

had virtually no cost. It was a great way to raise additional revenue for our fundraising goal. The

connection to a Chicagoland DJ who provides this service as an add-on package. The equipment,

red carpet and backdrop were donated to make the pre-event possible. 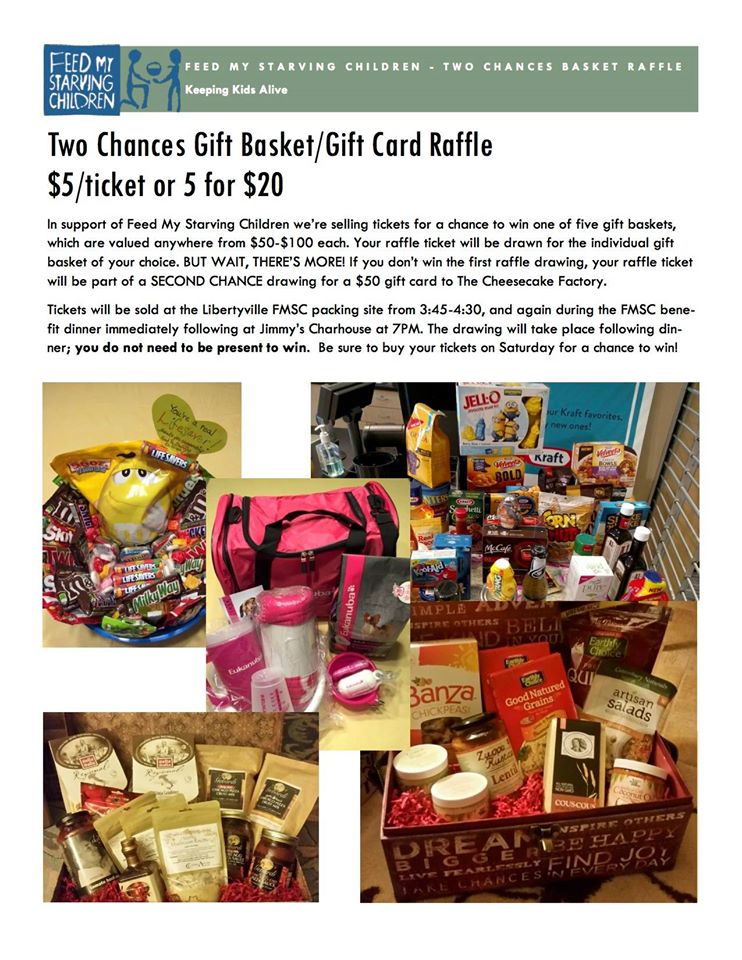 3. Select venues with low costs that are willing to donate a percentage to your cause. The post-

event at Jimmy’s Charhouse was a way for volunteers to decompress, enjoy dinner, talk about

their experience at the packing event and be present for the raffle. The restaurant offered a

private area to host the dinner where a cost-conscious menu selection was provided. For $20

dollars, a person received a choice of 3 entrees, salad, and soft drink with tax and gratuity

included. Children had a similar arrangement for just $10. The group members did not incur any

costs besides the cost of food if you chose to attend. It was an attractive deal which benefited

those that went to have a meal and in turn generated additional revenue for our charity.

4. Don’t assume that your company will help you with a donation. Many of the members in the

group had success in getting their companies to match or donate on their employee’s behalf.

they do not allow solicitation (no emails, no printed material handouts, and no discussions

during work hours). The potential to get donations from co-workers or recruit volunteers was

minimized because of strict policies. Do not rely on one source of donations. Learn the policies

of your company right away and find other ways of gathering donations or volunteers.

Otherwise, you will be scrambling at the end to get donations from family members and friends.

elements to the success of your project. We had every member accountable for a function

during the event and responsible for project deliverables. Every member completed their task

the status. Every member had different school, work or personal commitments and there

needed to be some flexibility in the expectations for deliverable completion. The lesson is that

project. It is very important to follow the WBS and make changes during the planning phase if

project milestone needs to be completed.

Every members input mattered. During the planning phase we all had many ideas that

were suggested and as a team we voted on whether it fell within our scope. It was important

not to become a victim of scope creep especially since we were working with another group. We

other and then give their own groups an update. We were able to avoid scope creep by keeping

the end result in mind and having the two groups remind each other what the goals were. We

learned that working with more people doesn’t make the project easier. The amount of work

but our goals may have been more modest. 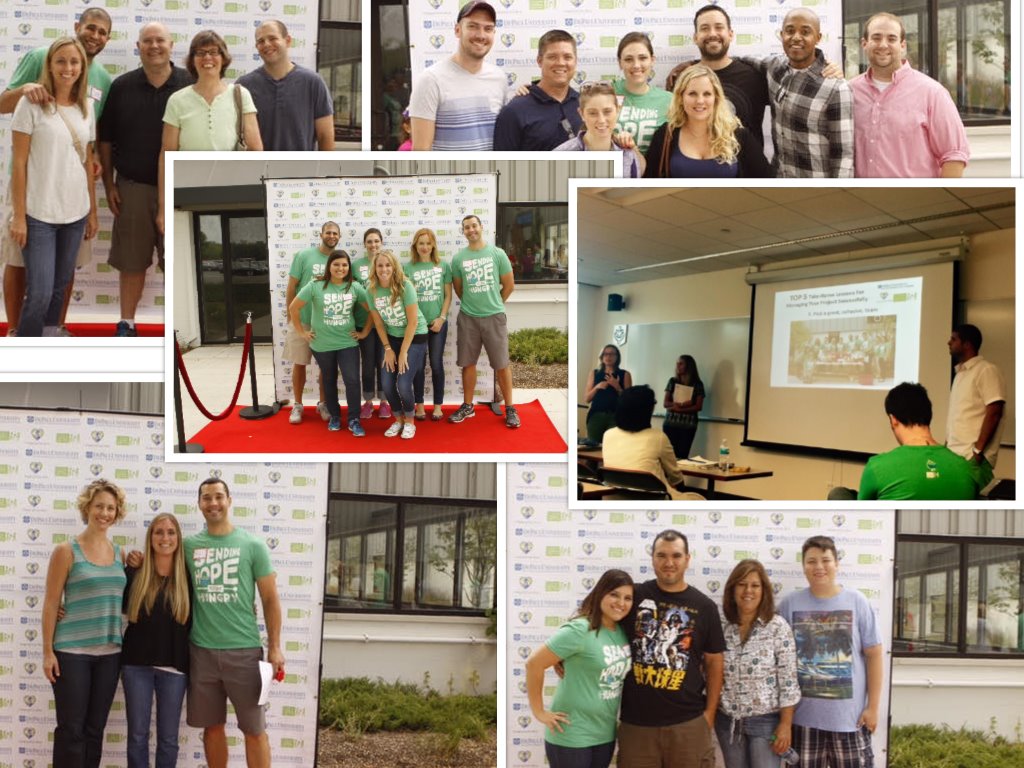 We have studied many of the technical parts of a project that make it successful. Good leadership, organization, and communication skills are ideal qualities for a project manager. With the growing diversity in different countries and the coordination of projects with global members, it is important to keep in mind the cultural differences which are unique to each person. Having a good understanding of the people who make up the project can make the project run more smoothly. Tensions sometimes arise when people misinterpret body language or the way that people say things. Misinterpretation of ideas and opinions can lead to project delay and/or poor quality product delivery. According to the article, things like accent, silence, gestures, and eye contact can mean different things for people in different countries. For example, not giving eye contact can mean a sign of respect for people of certain countries whereas in others, it is disrespectful not to look at someone when they are talking.

Not only are project managers dealing with people from different countries, they are also being thrown into a workforce where there are different age groups. There are currently 4 generations in the workforce today. These include veterans, baby-boomers, Gen. Xers, and Nexters. The last two generations are more diverse and flexible because they grew up in a more diverse society.

Although it is important for project managers to have effective communication and be able to balance the differences in their groups, it is also very important for the people forming those groups to be open and flexible as well. They have to be conscious that the people in their group are different from them and that not everyone sees the world the way that they do. This is true even when people are from the same culture. A good PM will get to know every person individually in order to better understand how to effectively communicate with the entire group.

The definition provided by the journal is “a temporary endeavor undertaken to create a unique product, service, or result.” It further explains that we must understand a project to be temporary so we recognize that there is a clearly defined end. The uniqueness of every project reflects that every audit, tax return, or consulting engagement is going to be different in their goals, objectives, and constraints.

As we have learned in class, the three important variables in a project are scope, cost and time. It is called the “Triangle of Truth” or the “Triple Constraint”. They emphasize that if you change the value of one of the variables, one of the two other angles, or both, must change to compensate. Many times, the focus is on cost and time versus scope and that is when issues can arise during the project. Scope creep was also mentioned but it was interesting to note that even though it seems there is a scope creep issue, it may not always be the case. If you do not have a clearly defined scope document, there cannot be scope creep because the scope was never properly defined. This can cause a project to go over-budget. If there is scope creep, it usually happens when the CPA allows more scope to be added without adjusting the other two variables of the triangle.

More and more, different areas of business are using project management to replace their old methodologies. Accounting firms are starting to use a project management framework instead of billing by the hour or using time sheets. I think this is an effective way of focusing on the scope of the engagement while keeping an eye on budget and time. With time sheets and billing by the hour, a CPA can lose sight of the main focus of the engagement. By having a project manager on top of the engagement and making sure the project is on track, the CPA can focus on doing the relevant testing and audit. An interesting measurement of success that is discussed is called the “Percent OOB”. This is calculated by taking the number of completed issues and dividing by the number that were completed on or before the original estimated completion date. This allows the project manager to predict whether the project is on track and alerts the PM if there is an issue. With the billable hours method, a red flag usually only occurs after you have already exceeded the projected time frame. To summarize, having a project management framework allows firms to provide their clients with a more accurate timeline on when their engagement will be completed. It allows the CPA/PM to adjust and consult with the client if the three variables during the engagement are starting to affect the other two.