Our team focused our project on raising awareness around food insecurity by conducting a 2-part fundraiser supporting Feeding America. In 2019, before COVID, approximately 35 million people (including 11 million children) were food insecure. In 2020, that number had increased to 45 million (including 15 million children). 1 in 5 children is now living with food insecurity. Feeding America is one of the primary partners in supplying food to many of those food banks.

The first event of our fundraiser was what we called a “Day of Hunger.” For every $100 raised, our team members went one hour without eating, up to a maximum of 24 hours. The team used social media and our network to raise money. All donations raised went directly to Feeding America. This event was held from May 21, 2021, at 5:00 pm until May 22, 2021, at 5:00 pm and was a huge success. The entire team was able to participate in the event for the entire 24 hours.

The second event of our fundraiser was a Zoom cooking event for individuals who donated $50 or more to the charity. One of the McDonald’s chefs hosted the cooking event and taught everyone how to make a McDonald’s Big Mac at home. The Zoom cooking was held on May 22, 2021, at 5:00 pm. Thirty-two donors qualified to attend, with sixteen actually attending. It was a great event, and we received a lot of positive feedback from the participants.

We selected to support Feeding America, the United States’ largest hunger-relief organization. They help provide approx. 4B meals annually. Feeding America works with farms, manufacturers, and consumer-facing businesses to rescue food that might otherwise go to waste. They provide this food to 200 food banks and 60,000 food pantries/meal programs. 98% of all donations go to food and programs for hungry people. $1 in donations can buy up to 10 meals for someone in need.

The overall project achieved almost all success objectives. We exceeded our project success objectives for donations, charity awareness, and self-reflection/understanding. We did not fully deliver on the project objective of having 20 people attend the private chef event as only 16 attended. We did have 32 donors qualify for the event, so we feel good that the event generated the interest and donations we were hoping for.

While we are pleased with the project’s overall success, inevitably, you can always think of opportunities to improve in retrospect. We have several lessons learned about managing projects we will be taking forward with us. A few of the most critical lessons learned include:

In addition to our lessons learned, our advice for future teams would be to take the time early in the project to think through ideas. Each team member was asked to submit a ‘request for proposal’ individually with a well thought-out idea for a project. This individual exercise helped vet potential project ideas and ensured each team member benefitted from the critical thinking involved with this exercise.

We would also suggest that future teams consider the talent development of each team member when considering the role they will take on and what they want to learn from the project. For example, we had someone on our team whose full-time job was a project manager. We had another team member volunteer for the project manager role to get experience with a skill set they do not do regularly in their full-time job.

Lastly, be sure to assign a clear decision-maker for each task/deliverable. It is very easy to have multiple decision-makers for a task, particularly when tasks are related. However, it is important to have a single team member be accountable to drive decision-making and ensure tasks do not get missed. 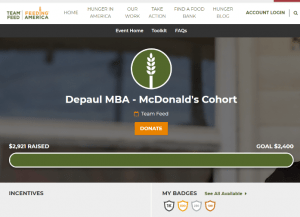 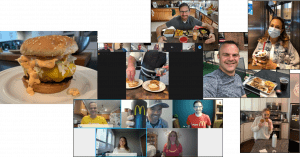