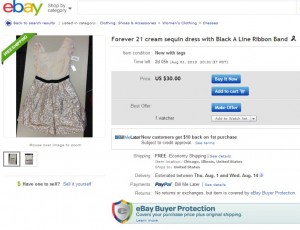 The Jackson Chance Foundation was started by Carrie Meghie, a mother that lost her son Jackson last year due to a terminal illness. During Jackson’s stay at the Lurie Children’s Hospital in Chicago’s Streeterville neighborhood, Carrie noticed her most expensive out-of-pocket cost was parking. Because doctors cited the presence of parents and family as a crucial step in development, the high parking cost was a necessary expense the family had to overcome. In order to help families with children in the NICU at Lurie Children’s Hospital, Meghie started a nonprofit organization aimed at helping these families with a focus on parking and transportation costs.
Our group rallied around this foundation with a plan centered around four main objectives: a social media campaign, an e-bay donation drive where all proceeds would go to the foundation, a PayPal one-time donation page link, and attempting to link up the organization with expectant mothers through The Bump Club. Out of the four initial targets, three proved to be successful, while one others stalled out due to varying factors.
We decided on these targets due to the opportunity to raise a large sum without risking investment in overhead like venues, supplies, special auction items, or food for an event. Because we had no overhead, we settled on an initial goal of $900, which would cover 2 months of parking through a 24-7 parking pass the Jackson Chance Foundation supports. After one week, we were already at $600 raised for the project!
At the end, our group tallied $1,750 in donations. These donations mostly came from our eBay donations and individual donations on PayPal, which seemed to be very successful. Our efforts in tying the Jackson Chance Foundation to The Bump Club are not represented in the $1,700 in donations, but we found out late in the project that The Bump Club had set a date for their own event to benefit this organization. Although not represented in our financial results, we believe that this connection will be a residual victory for the Jackson Chance Foundation.
Conversely, the social media campaign was a missed opportunity. We tried numerous Facebook strategies such as wall posts, status updates, and even an event invitation, but didn’t seem to get any hits off of this strategy. Our posts may have been a little long and wordy, but we believed early on that we would have more success than we did in this category. If we were to start the project over again, we probably would have made this interaction with our networks more visual-based, so that it would be more attention-grabbing and more of a call-to-action.
In the end, we felt as though our project was a success. We nearly doubled our donation goal to the Jackson Chance Foundation, and we hope that we helped touch the lives of several families with our efforts. In addition, an anonymous donor matches any donation up to $45,000 given to the Jackson Chance Foundation. Due to this, our $1,750 will now double, and we feel that because of this and the Bump Club connection, our project’s net effect will be over $5,000.

Reports have surfaced recently of the Federal Emergency Management Agency working closely with the Russian government to cross-train and share resources in efforts to build a stronger response to catastrophic world disasters. The article attached came from a very conservatively biased article that uses this partnership to attack the current U.S. leadership. However, taking the political conversation out of the picture, this cases is a perfect example to examine the project management capacities of the United States and Russia.

According to the article, the partnership includes “exchanging of ‘experts’ and ‘experience,’ ‘provision of security at mass events,’ and ‘cooperation in disaster response operations.'”

While to this day there are still several political disputes between the U.S. and Russia, there are also several glimmers of hope. Both of these countries have, over the years been a part of some of the largest projects ever managed by a world government. In perhaps one of the largest projects of all time, the Space Race captured the attention of the world. As both countries raced to see which nation would land a man on the moon first, the Soviets and Americans sprung forward in innovation and technology until the US landed on the Moon in 1969.

In a free-market, technology and innovation are rewarded, but attacks on innovation seems to create hostility that only hinders the forward human progress. A book entitled Macrowikinomics by Tapscott and Williams underlines this idea in its entirety. Having read Macrowikinomics, I have to disagree with the author’s thrashing of our current administration for partnering with Russia in terms of Emergency Management and other humanitarian causes that have partnered with Russia under the Obama Administration.

While I don’t believe Russia is a nation that can fully be trusted due to a complicated political history between the United States and Russia, the forward progress of humanity can benefit from the best minds in any nations collaborating to bring new technologies and techniques to solving some of the most difficult mysteries known to man, and in FEMA’s case, to solve some of the most challenging projects we face as a society.

While the Space Race was something that each country handled their own ways, a full collaboration would have likely brought humanity to the moon sooner than 1969. The same is true with the project management involved in deploying a team to help a natural disaster recovery. Sometimes response time is crucial, and creating partnerships to help with the aid can be the difference between life or death.

In closing, the author mentions that this partnership isn’t a popular one, but I believe if both countries proceed cautiously, they will both benefit from it.

Colleges and Universities throughout the country are scrambling to put together programs that center around Supply Chain Management. The field is growing with the increase in globalization and firms looking to expand beyond their domestic borders. These degrees command large salaries due to the specialization of those that possess the degrees.

As technology continues to make warehousing, manufacturing, and transportation quicker, these degrees will continue to expand in importance. The article below references that firms all around the world are hiring for this type of degree. This centers around industries from the food industry, to the software industry, to retailers like Forever 21.

Popularity is not the only reason for the increase in this specialization, but the complexity of the industry is changing as well. Many firms now outsource many responsibilities of their supply chain, such as the logistics, tracking, etc. because their in-house staff is not qualified to handle the responsibility. The training and resources required to increase a firm’s capability can cost more than outsourcing some of these services. As a result, firms like Chicago’s own Coyote Logistics and Total Quality Logistics have expanded exponentially over their decade of existence, primarily due to the Third Party Logistics (3PL) industry’s growth and their ability to compile resources to help handle freight of companies throughout the world.

I personally have been pursuing a Supply Chain Management MBA for the past three years from the University of Akron, and am closing out my degree by taking my final two classes at DePaul University. Speaking from personal experience, I feel that the pursuit of my degree in this area has opened doors that otherwise would not have been opened just due to the specialization of the degree. On February 4, I started my first day at Nestle in suburban Chicago, and I feel that the Supply Chain specialization has helped me embrace the continuing excellence and Six Sigma culture much faster than some of my colleagues that started around the same time as me.

I feel for the first time in my life that the possibilities of where I can go next professionally are endless. There are many opportunities in Nestle alone that have made the degree worthwhile for me, and should you have interest in helping a firm continue to improve, I would recommend it to you as well if you are considering furthering your education.