The Live Like Roo Foundation was founded by president Sarah Lauch.  Sarah rescued a dog named Roosevelt (Roo) at Chicago Animal Care and Control. He was an abused dog who was having issues urinating. While getting dental work it was discovered that Roo had cancer, and it was not curable.

Sarah decided to give Roo the life he deserved and set up a bucket list for him.  Unbeknownst to her, Roo’s bucket list went viral and all across the United States people supported Sarah while taking care of Roo. People donated money and items for Roo’s last couple months of life. About five months into to Roo’s new life he sadly passed away.

Sarah saw an opportunity to help families cope with the same feelings she was experiencing.  She decided to start the Live Like Roo Foundation. The foundation provides care packages to the families of dogs who have been diagnosed with cancer.  She also provides families with financial assistance to help offset the cost of medical care for their dog.

Each care package contains a hand-tied fleece blanket, several toys, dog treats, and a McDonald’s gift card (Roo loved McDonald’s cheeseburgers and ice cream). Sarah packages and sends each box herself. Her home is her office for the Live Like Roo Foundation. With the help of the foundation’s board members, volunteer committees, and friends of the organization, Sarah holds fundraisers and service events throughout the year.

Our group participated in a service event, “Cinco de Tie-O” at Archie’s Iowa Rockwell Tavern. The event was organized as a way for the charity to quickly tie and prepare fleece blankets that the organization could use for care packages provided to families and their dogs.  Our goal was to assist the organization as volunteers and promote the event. We were tasked with tying fleece blankets, promoting the event, and assisting with “day of” logistics including greeting guests, setting up tying stations, and handing out food to those that participated. 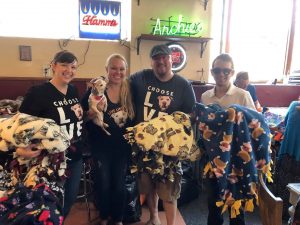 In addition to the service event, we also organized a brand awareness campaign for the charity. We took branded tennis balls (marked with #LiveLikeRoo) and set out to local parks to hand out the tennis balls and talk about the organization.

We distributed the tennis balls at the following Chicagoland locations:

In addition to handing out tennis balls, we also ran a social media campaign to raffle off a shirt created by the organization. To win the shirt, participants had to post a picture on social media of their dog and a #LikeLikeRoo tennis ball. Once the campaign ended, we selected a winner and sent the T-Shirt to them. 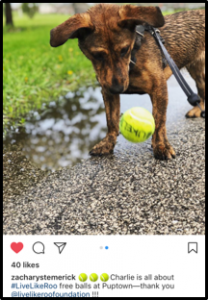 We had two channels to raise money for the organization – Facebook and the charity website. Each day our group would share our fund-raising campaign asking our friends and family to donate to Live Like Roo via Facebook or on the company site.  Also, we obtained a company match from Cboe Global Markets.

Our starting goals were the following:

Our final achievements were:

Time is an integral component to any project: it defines the groups ability to establish requirements and fulfill them. Additionally, more lead time before event allows for a more organized establishment of requirements and goals and, in managing an event, can be a correlated against volunteers​ and resources you are able to pool. Ultimately, it’s important to understand early on in a project that you need time to plan, market and throw your event. Even though we met our goal, we still wish we could have brought more volunteers to the event. The class is short, but people have plans. Make sure to get marketing as soon as possible.

Risk management plan only helps for risks you think about​. You cannot plan for everything but try to think of all the possibilities before they spring up. You will want to get out in front of any potential issues and establish contingencies in the event that certain requirements for your event are not or have to be adjusted to fit what you are to attain in the initial requirement’s place. You should have a Plan B.