The G.C.C railway is the long awaited  project by this part of the world, a project that would add to the collection and means of transportation in the area, which would inevitably be considered beneficial for individuals (commuting or transportation) and businesses (freight transportation). Bahrain’s ministry of transportation and communication explains, “The G.C.C Railway is envisaged as a regional integrated inter-operable railway catering to the transport needs of the Gulf Cooperation Council both in the form of freight- and passenger-travel”.

Ever since the G.C.C member agreed on starting the G.C.C railway there has been many changes on the proposed completion dates. Chung, M. (2010) reports “Passengers using a pan-G.C.C railway due for completion in 2017 could be whisked along at 350 kph under a proposal for a super-high-speed network stretching from Kuwait through the U.A.E and on to Oman”.

Furthermore, recent reports have pushed the completion dates up to 3 years ahead and concluding on a completion date of 2020. The reason behind that is the fact that countries other than Saudi Arabia and the U.A.E (who are almost certain to complete their operations by 2018) are not ready or are not capable of meeting the preset target, therefore the completion date has been pushed until 2020.

The main issue here is setting unrealistic and unattainable targets that resulted in the miscalculation of such vital deadline. I personally believe that their studies did not tap into main issues such as the external factors affecting the project’s process including the political unrest that has affected some parts of the G.C.C as well as the recent decline in oil prices that forced G.C.C governments to reduce spending, which definitely will have to effect spending on the joint railway network, and in Bahrain’s case decreasing oil prices will contribute into expanding the country’s government deficit. 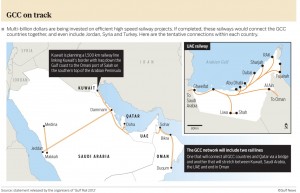 A more accurate reading of each country’s ability to contribute to a project worth over $200 billion USD was to be essential, however, as it stands the project is in process and as in the case of many projects however small or big it has to continue in order to reach its predetermined goal unless a significant issue comes up of course.

I have strongly stressed on the inaccurate reading of the completion date of such a regional project, simply because this type of error impacts economic and political issues in the region. For example, worldwide events such as Dubai’s 2020 Expo or Qatar’s 2022 World cup definitely needs the aid of the railway transportation services but more importantly it needs a time-efficient plan that is not constantly delayed, simply because the type of operation of such railway network project reflects the future performance potentials of the above-mentioned events, it reflects economic and political stability in such area which yields foreign investments.