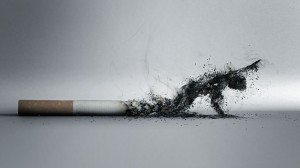 Apparently, it took 10 years for Reynolds American to realize that smoking is truly bad for you. Being the second-largest tobacco producer in America; this is a bit ironic. The new corporate policy, that is effective in the start of 2015, bans workers from smoking in the corporate offices located in Winston-Salem, North Carolina.

The workers will be given a “designated indoor smoking area” to smoke their cigarettes. However, electronic cigarettes will be allowed outside those areas.  The company is deciding to come in to terms with the safety of its products and states, “We’re well aware that there will be folks who see this as an irony, but we believe it’s the right thing to do and the right time to do it.”

So, what kind of effect does this have on the market place and operations of the company? Basically, the company is entailing that traditional cigarettes are harmful. They are sending out a mass message to their consumers saying that, the company is providing them with cancer sticks. So, who in their right mind would go buy a product from a company that bans their own workers from using it?

Imagine meeting a McDonalds employee and finding out that they can’t consume a Big Mac at work because the obesity rate has been skyrocketing. This would make a lot of people concerned about ever buying McDonalds again.

A business will only succeed, if they create and keep their customers. The company has sent out a marketing message that just might confuse their consumers. This decision might drop sales, having a massive effect on the operations of the company. The finances of the firm might get injured and the overall direction of the business might also get hurt. This message is not only concerned with marketing, but it affects the decision-making about production and operations as well.

The company might need to re-evaluate their strategic plan so it does not go in the wrong direction. The point of a strategic plan is to set the direction of a business, so the products and services meet the overall business objective. But, then what happens in this case when the company is setting a corporate environment that goes against the product they are mass-producing?

How will employees that smoke deal with situation? I’m certain that as a smoker; a person working for a tobacco company is very proud and happy with what they do. So, will this make them unhappy and reduce their work ethic?

Personally, I think that this decision might have a negative effect on the sales, work ethic, company morale, and overall operations. People have known for decades that smoking cigarettes is bad for their health. Regardless, of the warnings they have continued to smoke.

What kind of effect do you think that will have on the company? Is this a good decision or bad?

11 thoughts on “Smoke Gets In Your Eyes”