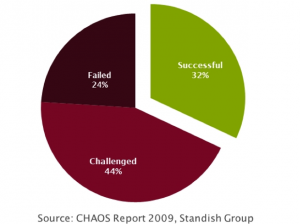 It’s stressful to fail in a project, but failure projects will give you some lessons you will never learn from successful projects.

Andrew Makar, the writer of this article mentioned 3 lessons can be learned from failed projects and was referring to one of the projects he was part of.

The project was an IT related project involved “implementing multiple web applications that supported resume collection and online candidate assessment”. Andrew was a business analyst for an HR recruiting project.

The project involved many internal IT professionals, consultants, and project managers. One of the main causes of the project failure is that they did not develop an integrated project schedule for the whole project. This in fact will raise many issues in such project as they will not be able to identify the critical path(s) or to have a good estimates for the time and cost of this project.

From what I’ve learned in MGT598 and from my experience in my professional life. It’s very important to have a written, scheduled plan for any project to be able to identify the critical path and any bottleneck in resources or time constraints.
The other lesson Andrew set was “You can’t escape the project triangle even if you’re an executive”, where he was referring to the scope, time, and cost. As they were running the project, one of HR executives decided to increase the scope of the project while thinking that this will not impact the other constraints of the triangle which are the cost and time, and for sure this was wrong assumption as the change in the scope without even studying the impact and the outcome of such change had a bad impact on the project as they missed the deadline and the cost of the project was over what was budgeted.

The lesson was to make sure that the scope is well defined and any changed in the scope is studied with impact analysis highlighted. This lead us to the issue of scope creep as well.

The third lesson was “Project heroics only lead to project failure”. Andrew described how the consultant in the project he was working in was acting like a hero and was working alone saying “just leave him alone so he could work” where at the end nothing from what he promised was delivered!

We learned in our field project “Raising funds” that the team work is a key in any project for it to be successful.

Do you agree with these lessons?

What are other lessons you believe can be learned from failed project?

Have you been part of failed project and what have you learned?

4 thoughts on “Lessons from failed projects”