“As an airline, if you’re not excited about summer, you’re in the wrong business,” said Mike Van de Ven, Southwest’s chief operating officer. In other words, if you cannot handle the heat get out of the kitchen. This summer, airport crowds are expected to be the largest in the U.S. since 2008. In 2012, all airline flights including regional had an average 76.1% on-time flight arrivals (flight stats analytics WSJ). That will not “fly” this summer. 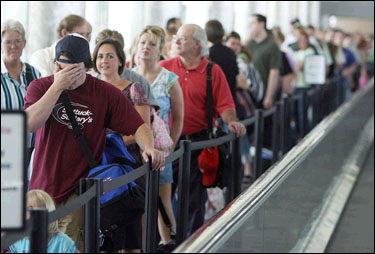 What method of forcasting informed Airlines that airport crowds are expected to be higher than recent years?

United had a terrible summer last year—only 67.9% of flights arrived on-time in summer months. Customer complaints soared. The airline blamed computer system problems related to its merger with Continental Airlines and an attempt to schedule planes and crews more tightly. The plan backfired because it created longer delays and widespread disruption when tighter schedules couldn’t be met. The use of Gantt charts to schedule turnover time is a simple strategy Airlines use. They are constantly coming up with new ways of speeding up this complex process. Southwest does not have to purchase many Airlines because of how fast they can turnover planes. They plan to use spare airplanes this summer to accommodate stuck travelers more quickly. Southwest plans to routinely keep operating late into the night rather than cancel flights on stormy days. This is a contributor to why Southwest is a leader in customer satisfaction.

What is a disadvantage to scheduling each project to tight with each other?

United says they are better prepared for summer because it has more staff and better scheduling. In addition, the airline has rolled out new graphics screens for its computer system to make it easier and faster for airport agents to use. United also is introducing new boarding lanes at gate areas. Five different boarding groups will line up in different areas, similar to how Southwest lines up customers by groups, so that each group will have a designated place to wait. A brilliant new seating system is set to take off. The coach cabin will board window-seat passengers first, then middle seats, and aisle seats last. With the “Wilma” system, as United calls it, seats fill faster because people already seated don’t have to get up as much to let a row mate in.  Now there are more reasons than one to get an window seat.

The industry as a whole have made changes that fliers should be aware of before making travel plans. Budget cuts in Transportation Security Administration overtime will likely lead to longer security-screening lines. Make sure travel plans are set in stone because domestic ticket fees change  to $200 from $150, and international change fees went to $300 from $250. United Airlines, Delta, American, and US Airways collected a total of $2.3 billion in reservation cancellation and change fees last year, according to the Department of Transportation.

Will higher change and cancellation fees persuade fliers to book with other airlines?

3 thoughts on “Airline Industry Summer Strategy: Have lessons been learned?”