Do you ever find yourself incredibly frustrated when boarding an airplane? Travelers tend to find themselves wondering about the order in which everyone boards the aircraft. Recently, American Airlines decided to adopt a new method to allow passengers to board quicker. This new method saves about two minutes on average per flight. Although the new method does not necessarily make a large difference for passengers, it does cut about 6,000 minutes a day for the airline company. American Airlines longs to improve their on-time performance.

The airline’s previous method was arranged by groups. Each passenger was assigned either group 1, group 2, or group 3, starting with group 1 at the front of the plane. The new method permits passengers with only a carry-on item on the aircraft second. This carry-on item, however, must be small enough to only fit under the seat in front of them. Passengers who buy business class or first class tickets do however, board first. This new method benefits passengers because those that do not have large pieces of luggage enter the aircraft and immediately take their seats.  Additionally, more passengers were willing to check their bags in at the gate because in return, they got to avoid baggage fees and were allowed to board early. Once those passengers are seated, those with luggage pieces have an easier time boarding since all the overhead bins are empty. Do you think this new method makes more sense? Personally, I have always thought the best way would be to board those in the back of the airplane second, then the middle of the airplane third. Business class would still board first, however. 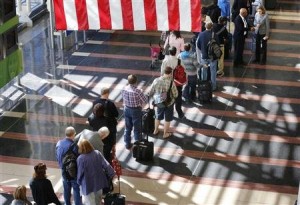 Virgin America has tried this boarding process about two years ago and decided it wouldn’t work for their company. The problems they encountered included debates between customers and employees about sizes of bags that would/would not fit under the seat in front of the passenger. Additionally, sometimes those passengers that boarded first used the overhead bins anyway. An airline consultant, Robert Mann, said this new boarding method can however, cut down American’s revenues from baggage fees.

I got to experience this new boarding method when I took a flight to/from Fort Lauderdale. I decided to check my bag in as I printed my boarding pass because I did not feel like lifting my bag and creating a line once I boarded the airplane. I was especially annoyed when I got to my gate and realized that the airline was allowing passengers to check-in their bags free of charge. I spent around $50 checking my bags in only to realize the airline was doing it for free. When I asked if I could get a refund I was told it was non-refundable. Although the new method makes complete sense and I support it, I do not think it is fair to trick loyal customers into spending unnecessary money on baggage fees. At the end of the day though, I am happy companies are trying to new methods to make traveling easier for customers.

One thought on “The Lighter the Better, Says American Airlines.”