After taking several finance courses at DePaul, I have gotten to know what a good deal would be and how to fall into the trap of a salesman.  A woman in Northbrook Illinois recently took out a car loan for 97 months. The reason she said she did this was because she has a child on the way and would like to pay for childcare and keep her payments affordable. As the years have passed and the costs of cars are rising, people need to take out loans that are longer in length in order to be able to afford them. This should interest all students and new car owner because it should make you stop and think, am I really saving money by taking out longer loans? The answer will always be no but not everyone will be able to afford the luxury of paying off a car quickly. 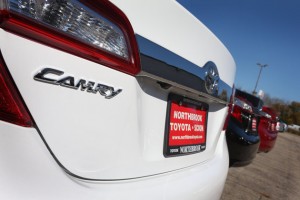 Banks and dealers are really taking a risk by letting consumers take out these long loans. By the time the car is paid back it will be worth so much less to the consumer. Also if the consumer does not pay the loan for example after five years of having the car, the dealership will not receive nearly as much as they should if they have to repossess the car. The women in the article took out the loan for 97 months and the difference in payment per month was only $5. That was fascinating to me because that is less then what an average person spends on lunch.
In our class textbook it talks about strategic approaches to competitive advantages.  Toyota has definitely stood out by making this 97 month loan and will now either force its competitors to lengthen their financing time or lose the business. This long term loan is going to appeal to a vast majority of our population and will therefore bring more business to the car dealerships. Being the first ones out there with this long term loan is going to push that Toyota ahead because the other dealerships will still have to contemplate if this would be the right move for them or if they will in fact be losing out.

Another issue that can arise from taking out a loan for such a long period is that people will keep their cars longer. The turnaround time for a new car is now extended and while the dealerships will be getting in business now they may have to wait longer for returning customers. Think about how often people in your life buy new cars? Will there be a large spike in people purchasing cars? Will this be an affordable option for newly graduated college students or lower income families? We will see.