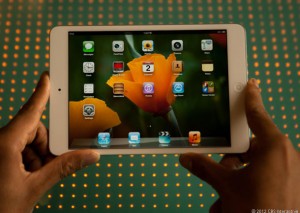 The iPad Mini just came out this weekend and as always they had a line waiting outside the door. It is sold for around $329 in stores all around. According to CNET.com, it takes only $188 dollars to manufacture. I found this really interesting because it got me thinking of how much money  they can make off every product. There are differneces between how much it takes to make a 16 gb compared to the 32 gb and 64 gb iPads. It costs another $80 dollars for the iPads with more memory in them. They also sell for $429 for the 32gb and $529 for the 64gb.

The iPad Mini looks great, but is it worth buying is what I have been thinking about. Apple has been known for their superior products and are leading their competitors which is the Google Nexus, Amazon Kindle, and the new Microsoft Surface. I think the product will do very well in today’s market because Apple has a reputation of having great products.  Only Apple has come out with a product of their tablet and making a miniature version of it. I think it is a good idea, but the question is, will it sell to their expectations? They are selling their product over $100 dollars more than their competition, and Apple assumes they can do so because you pay more for quality and a credible name. I believe thats why they are charging a significant amount more than other competitors, but they can do so, don’t you think?

It is unbelievable on how much money Apple is making off of their products. The come out with something new throughout the year every year. They have expanded since they started in ’76 and keep on expanding. The net worth of Apple a decade ago was $10 billion and the net worth as of 2012 is close to $500 billions dollars. It is crazy  to think of all that they have done in the last 10 years. I feel as though Apple is just getting bigger, they have not peaked and are still in their prime. They are going to have many new products coming out, and for now, it is the iPad Mini

Would you guys feel about the iPad Mini? Do you think you will consider buying it at any time? How do you feel about Apple and their expansion into one of the greatest companies in history?

4 thoughts on “iPad Mini, just one of the newest additions to the Apple familyT”