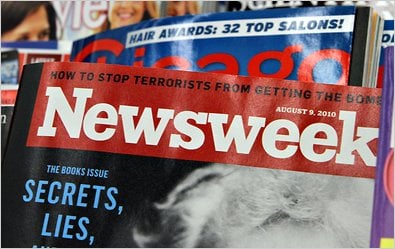 Smartphones, eReaders and tablets are becoming increasingly popular, which is why today’s consumers want digital material. Printed magazines, newspapers, and books are becoming the thing of the past. According to a Forbes article, Newsweek magazine has decided to go digital. After 80 years of printed publication, Newsweek realized they were in the stage of decline. Newsweek’s circulation went from an estimated 3.1 million between 2001 and 2007 to 1.8 million in 2010. And by July 2012, circulation was 1.57 million. In the declining stage of the product life cycle, a company must eliminate products or services that are not returning good margins. However, despite declining sales of Newsweek, Newsweek’s   founder/editor-in-chief and CEO, Tina Brown and Baba Shetty remain optimistic. Newsweek has come to understand today’s market and the growing demand for digital media, such as, digital books, digital music, online movie viewing etc. Thus, Tina Brown and Baba Shetty have decided to take Newsweek to a digital format and change its name to Newsweek Global. According to Forbes, Newsweek Global will operate on a paid subscription and be distributed via tablets and the Internet. Andrew Sullivan a blogger advised management to make the switch from a physical magazine to digital years ago since no one under the age of 30 read printed material. On the other hand, Felix Salmon of Reuters think reinventing Newsweek is a total waste of time due to the lack of demand for Newsweek. I personally feel Newsweek has a chance of surviving. What do you think, is digital the way to go?

4 thoughts on “Extra! Extra! Read All About Going from The Printing Press to Digital!”