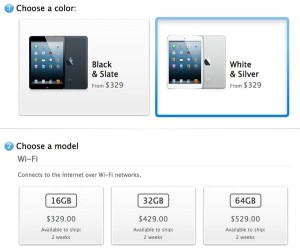 Apple has finally announced their iPad Mini. It’s set to be available for sale on November 2nd, with pre-orders starting October 25th. It’s 7.2 mm thick and weighs just 308 mg, but still has the same size screen as the iPad 2.  It features two cameras, a 5 megapixel rear camera and a 1.2 megapixel front camera.

So, why is it that something so simple as color makes such a big difference in sales? Being black or white has no impact on the function or the performance of the product. I have seen many instances where the color of the product was made out to be just as important as its performance. There are some car models, clothing items, and other products that are priced differently due to color as well. One retail store I used to work at always priced clothes that were black more than other colors.

Even for me, I find myself being more attracted to white Apple products. My iPhone, iPad 2 , and iPod are all white. I think they look more feminine and pretty compared to the black. I have many friends that have chosen their phones and other Apple products based on color.

So tell me, does color really matter? How big of a role does color design of products play in your decision making? Would you wait for more of the white iPad minis to be available or just purchase the black model and receive it on time?