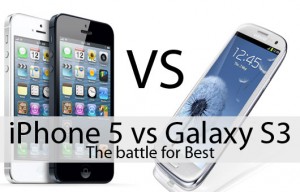 Everyone knows that the iPhone 5 and Samsung Galaxy S3 are two of the hottest phones out right now. Based on the marketing techniques used by Samsung this year, its obvious that the 2 companies are in fierce competition.  Most of you have seen the Galaxy S3 commercial making fun of Apples iPhone 5 and its users. The title of my post is from a quote in the commercial for those of you who haven’t seen it. I find the commercial to be quite clever and humorous (link for commercial posted below). Also, the day before the iPhone 5 was launched, Samsung used aggressive advertising on billboards and newspapers stating that the bigger screen and 4G network is already here, meaning the Galaxy S3. Now, Samsung is expanding the commercial to Australia and New Zealand later this month. Samsung usually does not go to these lengths when advertising for their devices, especially directly targeting a specific product. The article explains just how severe the rivalry between the two has become, since they are intensely battling over patent infringement as well. I feel that this has got to be the biggest rivalry between any two cellular phones. Samsung actually overtook Apple last year to become the largest smart phone maker, but strong demand for the iPhone 5 might cause Apple to take that title.

As stated in our chapter 5 slides, the objective of the product decision is to develop and implement a product strategy that meets the demands of the marketplace with a competitive advantage. I think Samsung has the competitive advantage with there advertising commercial because it strengthens and positions them better in the business environment. I feel like the commercial was a smart move on Samsungs part, and with out it, Apple would have more of a  “newer product” advantage against Samsung. Since the iPhone 5 is newer, I think it was key for Samsung to use the strategy of the direct commercial making fun of Apple.

As you can see, Samsung spends heavy on advertising to keep up with its strong rival. How big of an impact do you guys think this commercial was for Samsung?

Do you guys think it was a smart move by making fun of iPhones and its users?  Do you agree that they should expand the commercial in different regions?

Was this commercial essential for Samsung to stay competitive with Apple?

Let me know what you all think! 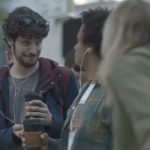 3 thoughts on ““The headphone jack is going to be on the bottom…POOOFF!!””