Redbox was first introduced in 2002 at McDonald’s locations. Today, there are more than 31,500 different locations and people have rented approximately 2 billion DVDs and video games.  At an affordable price of only $1 per day, anyone can check out a movie. You can find Redbox kiosks at Walgreens, supermarkets, food chain restaurants, 7 Elevens and even at the airport. Redbox has been so successful in movie rentals that it has put long standing movie chains out of business. However, Red box has taken on a new business venture; selling concert tickets with a fee of just $1. This sounds too good to be true doesn’t it?  Instead of waiting in lines at the box office or paying an outrageous processing fee, you can go to your local Redbox and grab tickets to your favorite concert. Redbox mentioned that they will not be selling front row tickets, but rather those seats that would otherwise not be sold at all.  The company will continue to rent  movies and games, but will now add ticket distribution at their kiosks. 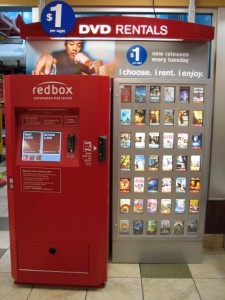 You can also go online to their website and purchase tickets as well. Starting small with their new venture they will start by selling tickets to Carrie Underwood’s, November 28 concert at the Wells Fargo Center arena. If you are looking to go to her concert and do not want to spend a lot of money $1 is a great deal, even if you do not have front row seats. Going one step farther, not only will the company sell concert tickets, but will also be selling tickets to sports events which include football games and NASCAR races. How great is that? You will no longer have to worry about those high fees or even drive very far to grab your tickets anymore. 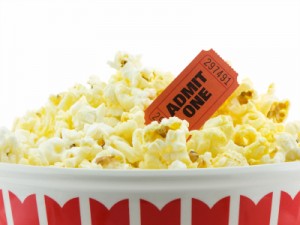 I believe that Redbox is taking a risky move, but I feel that they can potentially achieve success.  The company  is ultimately helping concerts and sports events by selling their unwanted seats  that would otherwise be a waste. Redbox is helping venues by making them more money and reducing their losses. Redbox will also be in a new competitive market which includes such ticket brokers as Ticketmaster. Usually these companies charge a large  fee for purchasing from their websites, but Redbox will charge a small fee of $1. It will be interesting to see how this affects these big companies, which have been selling tickets for years.I think Redbox has made a smart decision to step out of just being a movie and gaming rental, but a place for people to purchase tickets for both concerts and sporting events. They have already achieved great success in such a short amount of time. Time will only tell if the company’s new venture will be a success or not.

If you would like to read about this story below is the link: