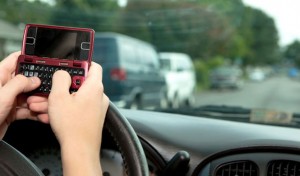 These days everybody has a cell phone…Not just any cell phone, most of us have iPhones, Droids and dare I say it…Blackberries. All of these devices have texting, tweeting and facebooking capabilities. Due to this “on-the-go” potential, more and more users are doing these things while driving. Since then, the number of car accidents has gone up substantially. In 2011, 23% of auto collisions involved cell phone distractions, in other words, that’s 1.3 million crashes. http://www.textinganddrivingsafety.com/texting-and-driving-stats/

Automakers believe that voice control is the solution that will permit drivers to safely text, tweet and update their Facebook pages to inform the world of the amazing fact that they are in the act of driving to work.  The problem with the notion of voice control as a cure for distraction is that it still is a distraction.

MIT researchers are working with Toyota’s Collaborative Safety Research Center to find the answer to the issue. Their goal is to measure the workload involved in the operation of a voice-command system.

The researchers equipped a car with cameras to monitor drivers’ eyes as they watch the road. Test subjects are also wired up with a heart-rate monitor and an instrument that measures galvanic skin response (like a lie detector) to assess their stress levels. The team will study the drivers while they perform physical controls and voice controls. This would allow them to predict the deterioration in driving ability that will result. http://bottomline.nbcnews.com/_news/2012/09/26/13967296-some-day-voice-control-may-cut-drivers-gizmo-distractions

The issue that arises is how necessary are these studies? Do we really want to include something in a vehicle that allows for these types of capabilities?

10 thoughts on “@Twitter: “Running late, no time for coffee #drivingtowork””